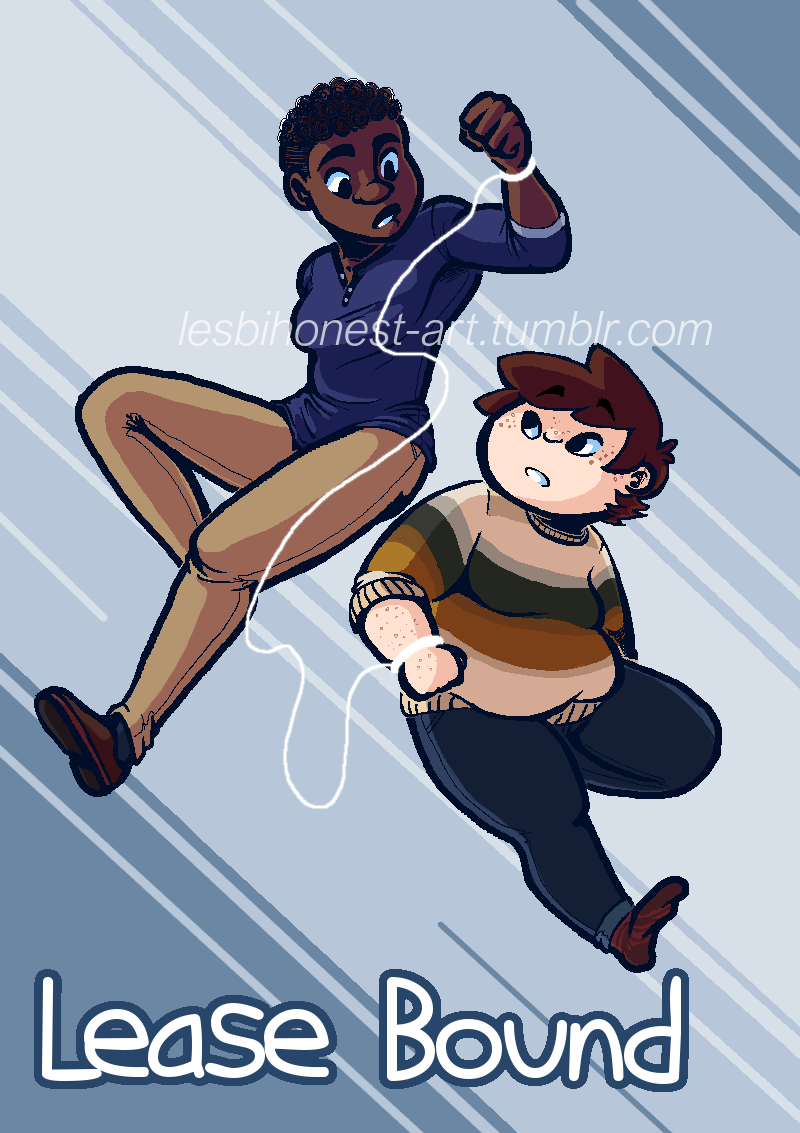 Jaden on the left, Riley on the right.

We all know the drill with current lesbian media. It comes in three distinct flavours:

With options like these, many lesbians find it hard to invest in supposed “Lesbian” Media at all. We’re starving for something to sink our teeth into, to love, to cherish, to celebrate together. But we’re getting table scraps at best.

At the root, it all comes back to the same underlying issue: the majority of “Lesbian Media” is not made by lesbians!

An amateur-made, on-going webcomic for lesbians, about lesbians, by a lesbian. Praise Sappho above.

Lease Bound is set in Australia, and has a premise you may find in a cheesy but wholesome 90’s sitcom. It follows our leads, Jaden and Riley; two lesbians who find themselves having to share a small, one-bedroom apartment after a mix-up with their leases. And, to quote creator Rusty Hearts (a.k.a Lesbihonest), “Friendship, and romance ensues”.

Romance may only be implied, but the lesbianism certainly isn’t. Within the first few pages of chapter one, both leads explicitly state that they are lesbians. Not gay, and absolutely not queer. Lesbians.

With the way they’re drawn, I’d actually believe it too! . Both Jaden and Riley are butch/ gender non-conforming. Women are depicted as we are, different: fat, tall, sturdy, strong, short, thin, and everything in between. Readers are also blessed with actual variation in facial features! The characters aren’t basically the same but with slightly different colour palettes.

It’s incredibly refreshing to see such diverse, and earthy representation. This is an ingredient that is sorely lacking in other lesbian media, as is, the Butch4Butch pairing I presume later chapters will bring (which I personally am very excited for).

Up until the recently released third chapter, no male characters had received any speaking roles, which is ideal to be honest. We could all do with less men in our media if you ask me.

My only criticism, is that the lesbian bar “Yonique”, only exists in the world of the comic, and is not actually in the heart of Adelaide.

The topic of lesbian spaces (or lack thereof) is a conversation for another day, but let me just say, seeing a space in Adelaide that is dedicated to us, even if it is fictional, is inspiring.

Overall, the story and characters are promising, and there has been steady improvement in art quality from chapter to chapter too. Lease Bound is bringing a lot of missing ingredients to the table. It gives us politics, humour, diversity, and great lesbian representation.

Read it here and enjoy!