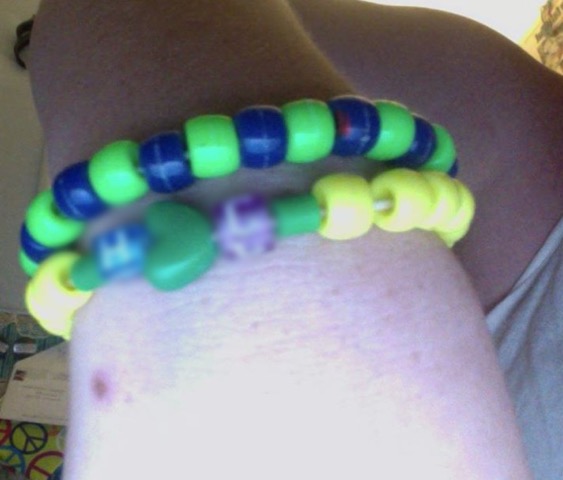 “We had a new girl today too. Her name is Lea. She’s pretty and she has adorable freckles. She’s 15 and she tried to kill herself. She has a valley girl voice. She cuts herself and apparently doesn’t really scar. She seemed like a bitch, but she’s so nice and we’re very similar. We sat with her, Juan, Evan, and Meg and the guys were going nuts trying to figure out if she was a virgin or not. She was acting very flirty and mysterious. She later told me that she’s “kind of a virgin”, she has done shit with a girl but not a guy.

This made me realize I’m bi-curious. Honestly, I’m attracted to and would totally hook up with Lea. I’m serious. Meg told me about these two girls that did shit in the room I’m in all the time. Diana and Miranda. I’d do it with Lea, honestly.”

Lea was the first crush I recognized as a crush, and I met her in the psych ward. PTSD brought me here the first time when I was 14, just two months into my freshman year of high school, and again in the beginning of the year. I attempted suicide a month earlier, and I had landed myself back less than a month after that. I had just broken up with my boyfriend of five months—a dear friend and a fine musician, but not someone I was particularly attracted to (he’s famous now).

Liking women was never on my radar. I did some theatre in middle school and high school, and I felt camaraderie of sorts with my gay male friends, but I didn’t know what the reason for that was. I never thought I could be attracted to women. I was drawn to Lea the way I was drawn to plenty of other “best friends” over years, the girls whose MySpace pages I would spend a little too long perusing. I told myself I just wanted to be them. I didn’t realize I wanted to kiss them.

I was infatuated with Lea, but when we were both admitted, I found out that Lea had a previous hospital girlfriend (imagine Orange is the New Black, but an adolescent psychiatric hospital), but she wasn’t interested in Lea anymore and she was leaving soon. During this time, I ended up kissing a girl named Sam. She was sent to my unit after getting into a fight, and she was coming onto me hard. I told her about my newfound realization that I was bi-curious. I wasn’t sure that I wasn’t attracted to her, but I wanted to kiss a girl, and Lea was making me impatient. We kissed on my roommate’s bed.

Word got out that we kissed. I denied it to my psychiatrist and my counselor, and they believed me. They told me she had a history of being “sexually inappropriate,” and a note she wrote me with our initials followed by the word “forever” compounded their claims. Even though I denied that anything happened between us, she still got moved to another unit. To this day, I feel guilty. It’s unlikely she got in a lot of trouble, but I let my own fear and selfishness come first. When I remembered this incident two years ago—five years after it happened—I tried to find her Facebook to apologize. I couldn’t.

“Try everything once, you know? It wasn’t too bad. I might be bi.”

“Lea and I were trying to seduce Evan. It was stupid. She’s an attention seeker but it’s okay. I’m nervous to kiss her because I feel like I’ll get in trouble and my parents will find out. Oh well. Only live once, right? I’m ridiculously nervous. I hate that my last kiss was Sam. I’ll kiss Lea, because she’s really hot, and I want to. It was fun when we were seducing Evan before. We’ll do it in-between 15 minute checks. I wish we had a clock in here to keep track of time. Getting caught would suck so much. I will kiss Lea and get away with it. Gotta remember to use The Secret. No negative words. The universe doesn’t interpret those. I will kiss Lea and only we will know.”

As much as I wanted to believe I was turned on because we were taunting these boys about whether or not we (and especially Lea) were virgins, it was because I was thinking about Lea. My feelings for her were clear not just to me, but also to everyone. An extensive amount of planning goes into relationships and kissing in psychiatric hospitals. You have to make sure staff doesn’t see you or that they don’t know you’re gay (or risk a record of being “sexually inappropriate,” like Sam), that other potential snitches don’t see you, and that you time it correctly between the fifteen-minute checks that go on from the moment you enter the hospital to the moment you leave.

“The snow is falling and I’m talking about it with Lea. It’s beautiful. It’s incredible that no two snowflakes are identical, like people. Falling people. If you stare and look enough it’s like you’re in a trance or in space. I love finding a big one, then watching it fall down, and catching another. We’re just waiting for the next check. Now I’m nervous. I will do well. I want to do it, but I’m nervous. Like, a lot. Whatever.”

Our first kiss happened quickly, with pounding hearts and shaky hands and nervous glances. We pecked and checked the door again—it was clear. I will never forget the way my heart pounded when we looked into each other’s eyes and I swept her hair behind her ears. Between the moments looking up at the snow falling down from our hospital window, we kissed again. It was ecstatic. I never realized what kissing was supposed to be like until Lea. It wasn’t the performativity of kissing some random older cousin in the bathroom at Annie’s thirteenth birthday party, racking my brain for the sequential steps from the WikiHow article on kissing boys. I didn’t feel like I wanted to run away, and just needed to work on getting used to kissing boys through exposure therapy. It wasn’t the empty gratification of feeling wanted by boys. It was inspired, and gentle, and present. It felt so right.

If time exists at all in the psych ward, it passes strangely whether from the meds, the lack of daylight, or the sense that the time between fifteen-minute checks is the only time that’s real. My time with Lea is a blur of messiness, confusion, and utter excitement. She made me a bracelet with both of our first initials, which was convenient since those happened to be my full initials. We passed notes late into the night and during group therapy. We taunted the boys and we’d go back into our room and kiss quietly between fifteen-minute checks. In the game room, we’d sit on the floor and make out, letting the pool table block the vision of the psychiatric attendant. In partial hospitalization when we were finally allowed time to go outside, we’d walk to the doctor’s parking lot we would make out against the Range Rovers. At one point, we both used broken plastic spoons to carve each other’s first initial into our ankles. Why? I have no fucking idea. But I don’t regret it a bit.