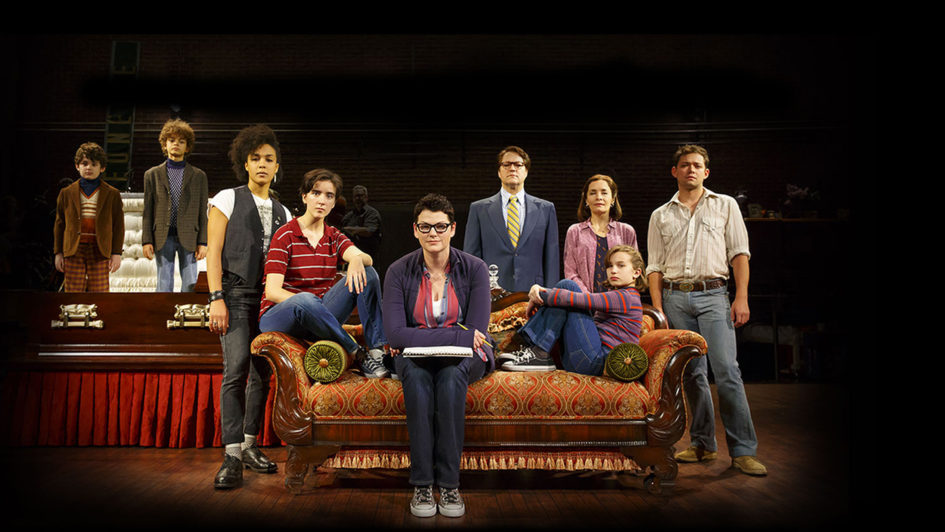 Fun Home is an award-winning musical based on a graphic memoir of the same name. The memoir was written by Alison Bechdel, and it centers around her life as well as that of her father. Small Alison grows up in a funeral home– which she and her two siblings refer to as the “fun home.” Medium Alison goes off to college, realizes that she’s a lesbian, and then learns that her father is also gay and has had affairs with men… shortly before he commits suicide. Present day Alison narrates.

The Musical version of Fun Home was created by Lisa Kron (lyrics) and Jeanine Tesori (score). They took something that was already great and made it ten times better.

One of my favorite scenes from the show is when a young and awkward Alison (played by Abby Corrigan) has her first sexual experience, and then breaks out in song right after. With such gems as “I’m changing my major to sex with Joan, with a minor in kissing Joan” and “let’s never leave this room. How ’bout we stay here ’til finals?” Changing My Major stands out as one of my top three songs from the entire musical. In the words of Bechdel herself, “[An] excruciatingly awkward first sexual experience was turned into an exuberant showstopper.”

Ring of Keys is perhaps one of the most popular songs from Fun Home. I heard it two years before I finally got a chance to see the play. It was performed at the 2015 Tony Awards. It’s about Small Alison seeing a butch lesbian at a diner and recognizing that they shared an unnamed similarity. I relate to it so hard, as I’m sure many lesbians do.

Fun Home is a perfect combination of comedy and tragedy. There are moments that will make you laugh and some that will leave you teary-eyed. The cast is made up of talented actors who give it their all every time they set foot on stage. This play– which has a lesbian protagonist– is incredibly important and groundbreaking. You have to go and see for yourself. Fortunately, they are on a nationwide tour.