Created by Mariah Hanson in 1991, and hailed as “the largest lesbian event in the world”, Dinah Shore (a.k.a Dinah) takes place in Palm Springs once a year. When I think of Dinah Shore, I imagine wild pool parties, people making out with strangers, and that one episode of The L Word, but since I haven’t actually attended the event yet (a fact that is soon to change), I hit up some of my friends who have, and asked them to share their stories.

THERE ARE OTHER FISH IN THE SEA

Last Spring, my girlfriend and I broke up after being together for four years. My life felt like it was ending. I always thought she’d be the one that I’d marry. I went to Dinah to forget. I drove up to Palm Springs alone. It was my first time attending the event. While I was there, I met someone who would later turn out to be one of my best friends. She encouraged me to go up and talk to a woman who I drunkenly described as “the most beautiful person in the world.” And so I did. We danced and had a good time, and then I drove her to her hotel at the end of the night. Nothing happened. Well, nothing except for the fact that I realized that I was still capable of meeting and falling for new women. My love life didn’t have to end just because my last relationship did. I left Dinah thinking “there are other fish in the sea”.

IT ALL STARTED AT DINAH

I met Tessa and Sarah at the welcome party. They weren’t dressed to impress. They were drunk and dancing like crazy people. They were having fun and not caring about what other people thought. I knew then that they were my kind of people. I instantly wanted to be friends with them. Sarah was soaking wet. She told me that she had fallen into the pool because she was drunk. That made me laugh. We hung out for the rest of the weekend, going to parties, and after parties together. On the last night of Dinah, Sarah gave me her plastic “gold” necklace, and told me that we should hang out when we got back to LA. We did! And now we’re like a big lesbian family, with countless new friends. Our friendship started at Dinah, and we’re all going back again this year. 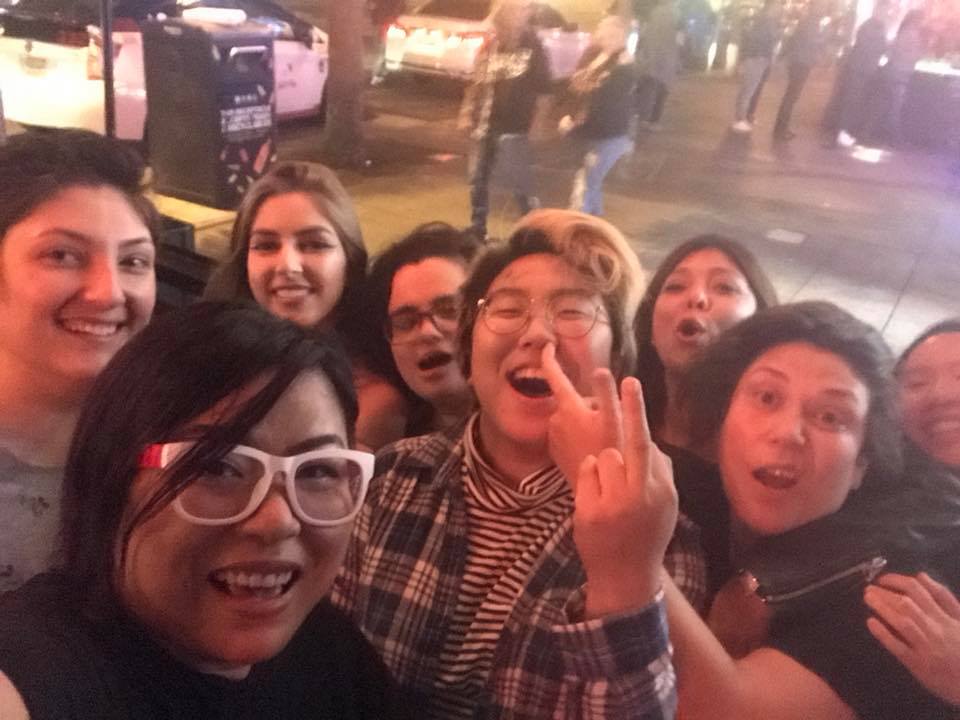 Some of The Crew

I read about Dinah Shore somewhere on the internet a few years ago. The idea of a huge event that catered towards lesbians completely blew my mind. We didn’t have anything like that in North Carolina. I immediately wanted to go, but I was underage. As soon as I turned 21, I bought a ticket to Dinah and began counting down the days until I would be in Palm Springs. I didn’t know any lesbians who I could go with, and so I had to beg my straight friend to tag along with me.

I could have sworn that I saw her making eye contact with a cute butch woman at one of the pool parties, but I brushed it off because she was straight, and had identified that way the whole time I’d known her. So imagine my surprise when I stumbled into our shared hotel room later that night, and saw her in bed with the cute butch. My friend looked mortified when she saw me. I quickly left, and wandered about for an hour or so. When I came back, she pretended to be asleep so we wouldn’t have to talk about it. Things were awkward at first, but by the time the weekend was over, we were able to laugh about it. Still, I can’t believe she hooked up with a woman before I did.

If you ever go to Dinah, you’ll be sure to come back with a story to tell. Tickets to this year’s event are available here. Get them while you can.