Watch a Web Series: Because There are No Lesbians on TV

Have you ever watched several seasons of a TV show you don’t particularly like just because said show happens to have one lesbian in it? Are you sick of watching the few lesbian characters we have on TV get  killed off one after the other? Are you completely dissatisfied with the current state of lesbian representation on TV? 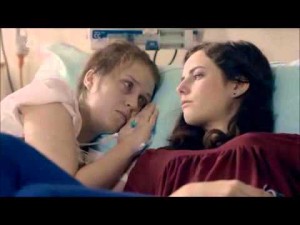 Naomi right before she dies of cancer (Skins)

If you answered yes to any of those questions, then maybe it’s time to watch a web series instead. The internet has given people who typically aren’t represented in mainstream media an opportunity to create our own content and share it directly with the viewers. As a result, lesbians are as abundant in web series as they are scarce on TV. For your viewing pleasure, I have compiled a short list of web series that have lesbian characters in them:

‘Dyke Central’ is an Oakland-based dramedy that centers around 30-something butch best friends and roommates Alex and Gin. The pilot episode sees Alex and Gin scrambling to find a new roommate to ensure that Jackie, Alex’s girlfriend, doesn’t move into Dyke Central, while Bay Area newcomer Fabiana sets out to discover the real Oakland.

Sidetrack follows the lives of a group of lesbian and bisexual women who live in New York City.

Lavender Collective is a comedic web series that focuses on a group of lesbians who meet up once a week to talk about everything from their experiences with lesbophobia to whether or not lesbians should stay friends with their exes.

F TO 7TH is a comedy about Ingrid and her descent into pre-middle age. Judgmental as ever, Ingrid struggles to find herself in a world where sexuality and gender have left her old-fashioned lesbianism behind.

[Edit: Trigger warnings for male nudity in the 3rd episode of season 2, and jokes about molestation in the 4th episode of said season]

INTO GIRLS is a lesbian web series which covers everything from figuring out if the woman you’re hanging out with is into you to dealing with a crush on your straight best friend.