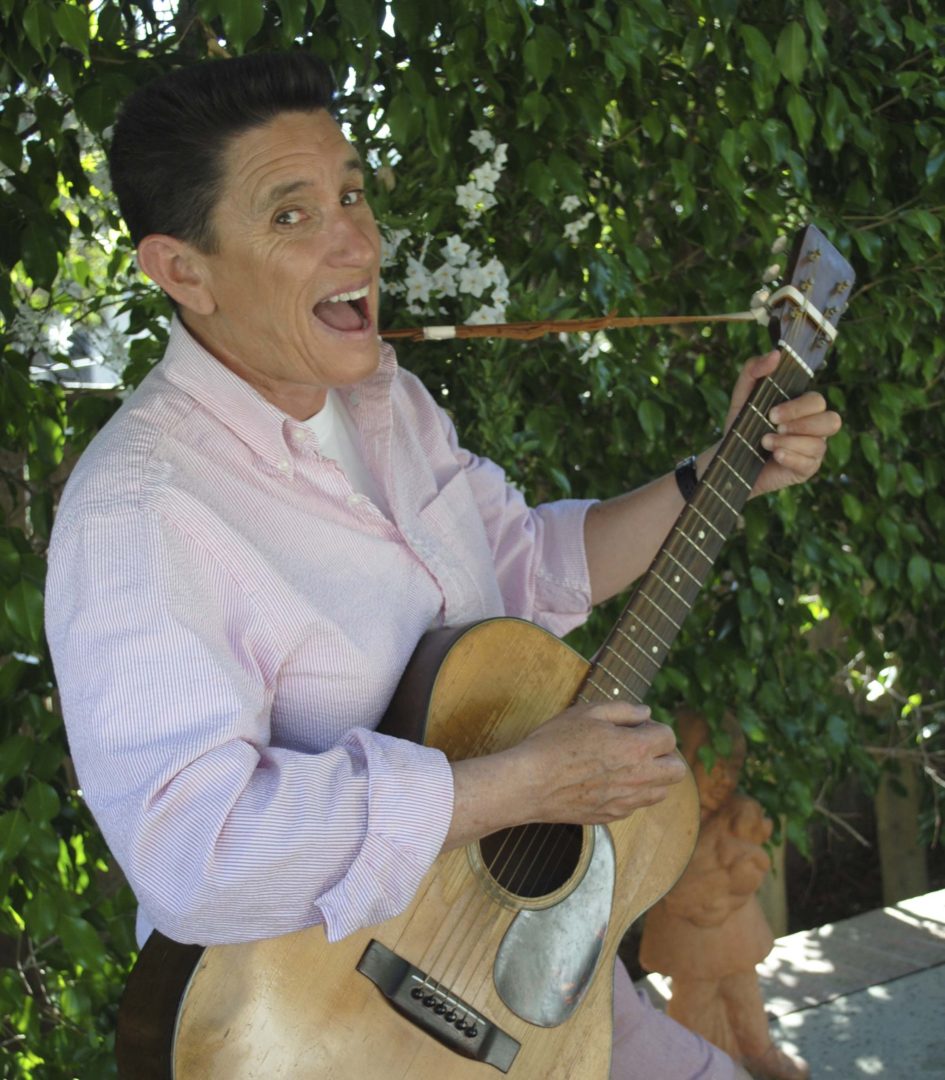 Phranc is a lesbian singer-songwriter who has been in the music scene since the 1970s. The first time I saw her perform was in 2015 at Killjoy’s Kastle: A lesbian feminist haunted house in Los Angeles. She instantly caught my attention with her song Bulldagger Swagger, which includes the lyrics “I’m not trying to be a man, I’m just being who I am, and that’s a very very very butch lesbian”. I thought she was funny and charming. Later, when I told my friend about the hunted house experience, and casually mentioned that I had seen a performer named Phranc, she freaked out (in a good way), and informed me that Phranc was a big deal. I wouldn’t have guessed it because of her chill demeanor. I ran into Phranc again recently, and I asked her a few questions.

Q: What made you choose the stage name “Phranc”?

A: In May 1975, I attended The Lesbian History Exploration, an all lesbian weekend retreat that included all kinds of artists. I liked the name “Frank” because it was simple and “Frank” and it reminded me of “franks and beans”. I thought it was funny. I was also sick of the name Sue. My given name was Susan. I was named with good intentions after my Grandmother’s mother Suzy. So I grew up with the name Suzy, and then it became Sue and then “a boy named Sue” and other jokes en-SUED! So I was ready for a change. Everything else in my life was changing. I was out as a lesbian. I had moved out of my parents home. I was out in the world as a young dyke and activist. That weekend, being eco-minded, we all wrote our names on paper cups. I wrote the name Franc on my cup. In the evening Alix Dobkin sang, Elsa Gidlow read poetry. We watched Betty Dodson’s slide show of vaginas orgasming, and Liza Cowan’s “What the Well-Dressed Dyke Will Wear”. As soon as I got home, I went to the barbershop and buzzed off all my hair and went to visit my friend Punkin to show off my new haircut and name. “I’m Franc” I said when she opened the door. “Wait right there” Punkin said. She returned in a minute holding a blue baseball cap with the letter P. “P-H -ranc she said, and that is the story of how I became Phranc.

I Enjoy Being a Girl

Q:Throughout your career, you’ve maintained an androgynous look, were you ever pressured to be more feminine?

A: I have never changed my look. All my album cover concepts are mine. I did shave my legs as a publicity stunt when my record “I Enjoy Being a Girl” came out on Island Records. We had a lot of fun coming up with the promo campaign. I also was on the cover of Paper Magazine in femme drag but that was for an April Fools issue and Francesco Scavullo took the pictures so I couldn’t resist. 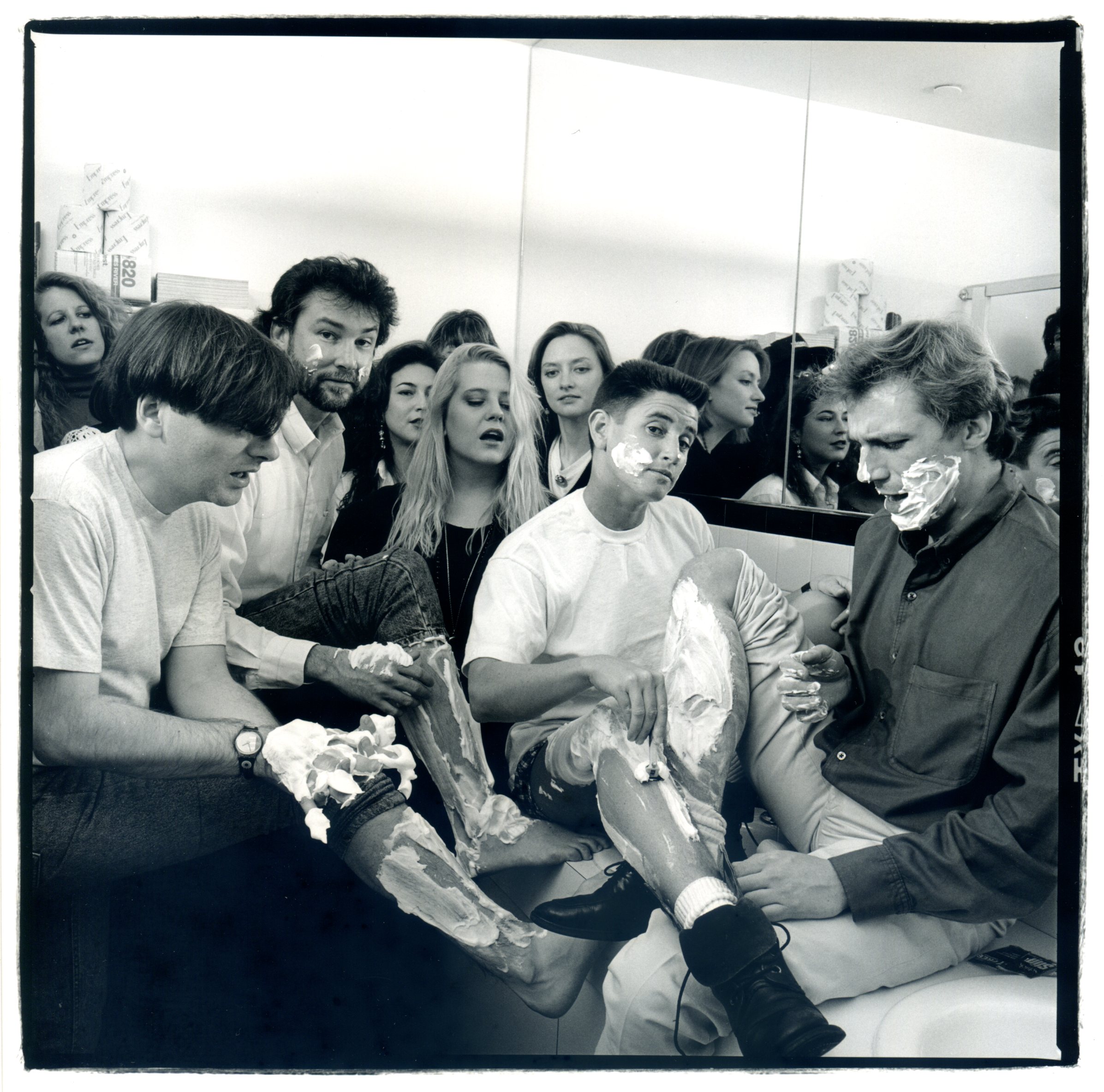 Phranc in a Promo Shoot

Q: You’ve been in a number of bands, including Nervous Gender, and Catholic Discipline, what made you go solo?

A: I played my guitar at Dorothy baker’s Coffee Shop at the old Woman’s Building on Grandview in Los Angeles. I had always been a folkie. But the folk scene was long gone. I found punk rock in San Francisco, and for the first time felt like I fit in. People were my age and angry and political and making great music. Great smart lyrics but it was hard to hear the words. Nervous Gender was a synthesizer-based band. I didn’t even know what a synthesizer was but was game for anything. So it was me and three gay men, Gerardo, Michael and Edward. I also played guitar in Catholic Discipline and Castration Squad. I wrote the song “Take Off Your Swastika” as a response to the punk fashion of wearing swastikas and decided to play it on acoustic guitar so the words could be easily heard. That is also when I started introducing myself as The All-American Jewish Lesbian Folksinger. The rest is history.

Q: What was your local lesbian scene like in the 70s and 80s?

A: When I came out in 1975, the local scene was humming. The west side of LA had the Women’s Center, a small bungalow that was home to The Lesbian Tide, Sister magazine, The Fat Underground, drop-in rap groups, and other activities. The bar scene was going strong with places like The Skylight, The Palms, Big Brothers, The Stowaway, The Oxwood Inn, Jewel’s Catch One, and The Flamingo. The east side had The Woman’s Building, where many lesbian dances were held. They also housed the original Sisterhood Bookstore, art galleries,The Feminist Studio Workshop, The Women’s Graphics center, and much more. It was an exciting time!

Q: How does it differ from the scene today?

A: Now there are no Dyke bars left. The last one,The Oxwood Inn, just closed. No Woman’s Building. No Women’s Center. No real gathering place for lesbians. I miss community. I feel pretty isolated sometimes. I am craving some LESBIAN SPACE!!!

Q: What is your favorite kind of gig to perform at these days?

A: I have recently started performing more frequently. I like playing small intimate places, but I’m dreaming of playing really huge places again. I am looking forward to the possibility of some folk festivals next year. I will be releasing a live album in the spring of 2018 and hopefully a new studio album in 2019. As The Cardboard Cobbler (another moniker she has adopted), I make and exhibit paper sculpture.

A: What do I want the most? A safe world for our two daughters to grow up in and some LESBIAN ONLY space to share. I’ve got everything else I need.