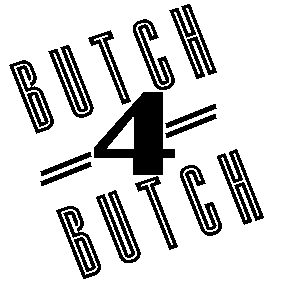 An older lesbian I used to look up to once told me the story of her first experiences with dating after coming out. She said “I was a pretty girl, but I kept attracting ugly girls. So I had to become an ugly girl to get with the pretty girls.”

In her view, butches were “ugly girls.” And as an “ugly girl” who only liked “ugly girls”, her words stuck with me.

In my experience, a lot of lesbians—especially older ones—feel similarly about butch4butch attraction. The lesbians I used to hang out with would say “it’s not what god wants.” One said that the thought of butches dating each other was “disgusting.” She said it as a joke, but her words still stung.

The butch/femme attraction spectrum seems to differ regionally as well. Back in my home state of Nevada, it was primarily femme/femme or butch/femme. Since I’ve moved up to the Pacific Northwest, I’ve noticed a handful of explicitly butch4butch dating profiles.

Attraction between two masculine women certainly isn’t what society, inside or outside of the LGBT community, seems to want. Lesbian representation in media is scarce to begin with, but when we are portrayed, we’re mostly shown in femme/femme pairings.

On a rarer occasion one might spot the classic butch/femme combination. But I can’t say I’ve ever seen a butch/butch couple on TV or in a movie.

Will we ever see butch/butch couples onscreen? My fingers are crossed but I’m not exactly holding my breath. Considering that gender nonconformity in women is so societally discouraged and unmarketable, butch/butch pairings on TV and in films seem to be a bit of a longshot. After all, what good is a woman if she’s not pretty to look at?

Two masculine women together seems so unfathomable to some people that we often get the roommate treatment, sometimes even from other lesbians. When I went out with with butch partners in the past, most people thought of us as just a couple of bros out on the town. One woman even flirted with my girlfriend right in front of me! I admire her brazenness, but the two of us had been cuddling up moments prior. Not exactly bro behavior.

“You’re the most boyish girl I’ve ever dated” is something that I’ve heard more than once throughout my dating career. Existing in a sort of masculine grey area, I don’t actually consider myself butch in the classic sense. Put me next to a femme, however, and you’ll definitely see the difference.

Because of this grey area, I’ve ended up being the masculine exception for the majority of my butch partners. It doesn’t feel too good to be an anomaly. One of my partners would often ask me why I didn’t wear makeup anymore, or why I wouldn’t wear feminine clothes anymore. I felt pressured to be more of what she wanted, but at the same time performing femininity felt like I was lying to myself.

It’s fine that my partners had a preference for femmes, many butch women do. I feel kind of flattered that they’d even make an exception for me!  It does leave a yearning in me, however, to be with someone who genuinely desires me the way I desire them. Butch4butch attraction is beautiful. For me, it means being with someone who truly understands how I feel about sexuality and gender and presentation. It’s being with someone who knows what it feels like to be the other, even in our own community. It’s letting go of the tough exterior together and basking in each other’s tenderness. It’s also a two-for-one on wardrobes when you U-Haul! Sure, it’s not as easy as if I were to try to date femmes, but I love being myself and loving who and how I want. It’s unique and wonderful and I feel lucky to be able to experience it. God(dess) bless butch4butch!