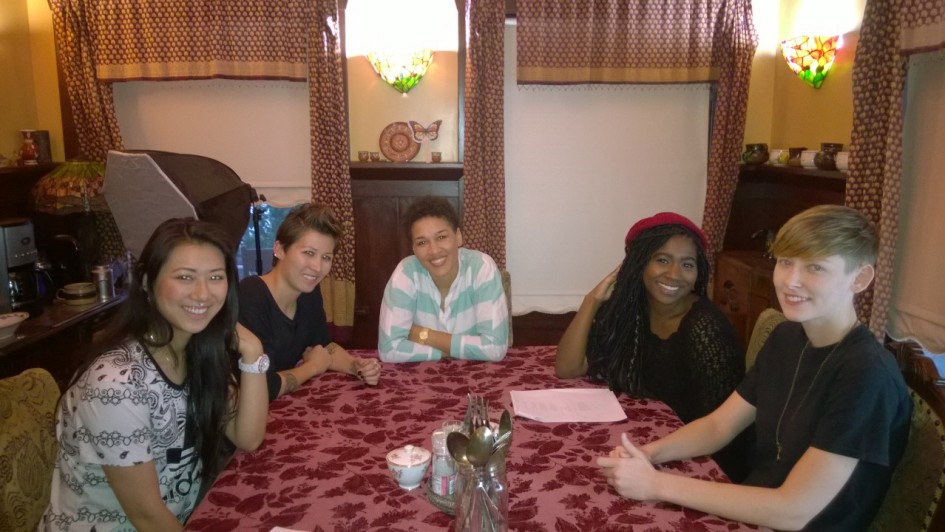 Lavender Collective is a short Youtube series about a group of lesbians who are fed up with the state of lesbian representation and want to create something of their own. It begins with Natalie (Dior Williams) and her girlfriend Chloe (Tiaday Ball/Jennifer Pedersen). 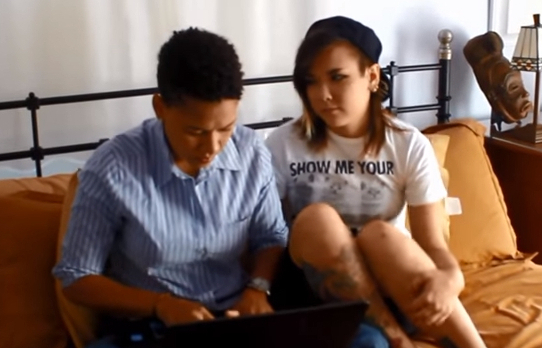 Natalie is a Journalist. She has a serious problem with her boss, Lisa (Katie Brekalo), who is out to prove that feminists aren’t all a bunch of “hairy, man-hating lesbians” with her new sex positive “feminist” group. Attendance is required.

This is how Natalie and Chloe find themselves in a room full of women chanting “Get that dick! Get that dick!” Basically, hell.

Chloe, the hot-headed idealist, confronts Lisa after the meeting is over. But Natalie doesn’t want to rock the boat if it costs her a career, so she and Chloe agree to start their own group, just for lesbians. And so the Lavender Collective is born. 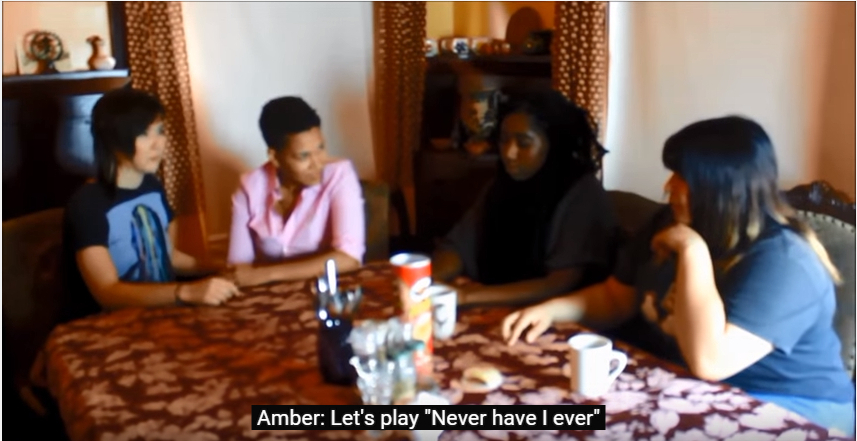 “Let’s play Never have I ever.”

Rain, who is in college, is still pretty new at the whole lesbian thing. The group becomes a major source of support for her as she works up the nerve to flirt with cute women in her apartment building. This leads to her landing a date with Jamie (Ashley Obinwanne). 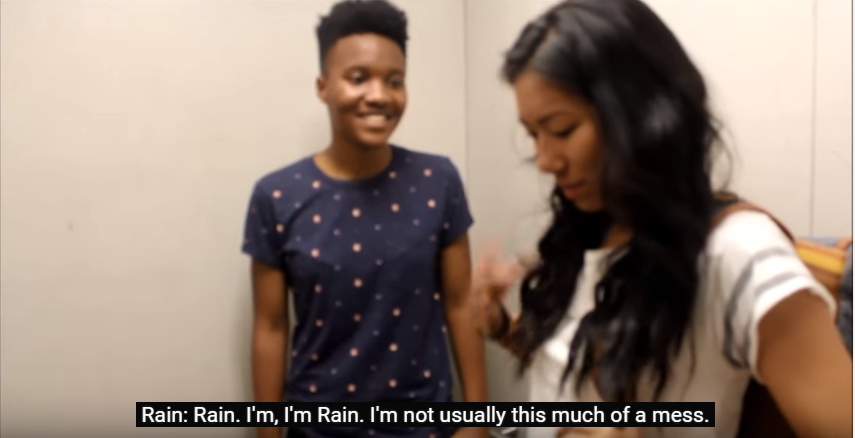 Erika and Amber round out the group as the voices of experience and maturity, and when Chloe’s job interview ends with a stern “we’ll keep your application on file,” Erika can see right to the heart of the matter. 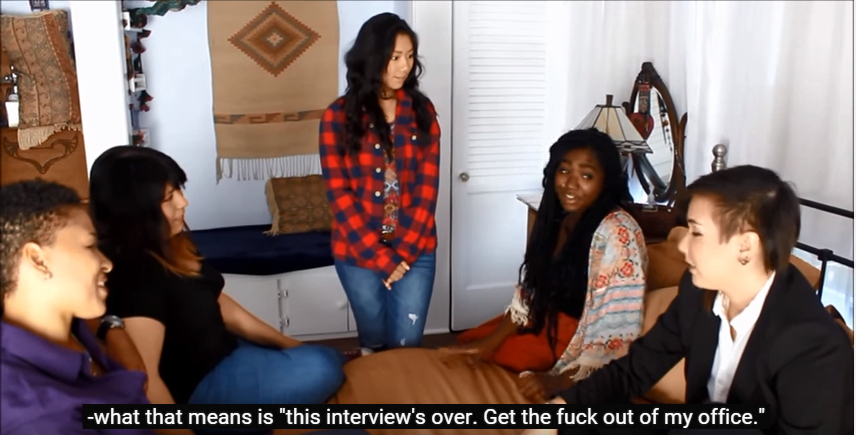 Season 2 starts to develop plotlines surrounding the main characters, and I’m really getting invested in the drama. Jo (Jordan Casey) is Natalie’s new coworker and wait for it– Erika’s ex. The one who broke her heart before she left Portland. Rain and Jamie’s relationship has moved well beyond going to Andrea Gibson shows.

Jo has suddenly moved to LA to be with Erika, which would be really sweet and romantic except they broke up two years ago and haven’t spoken since then. 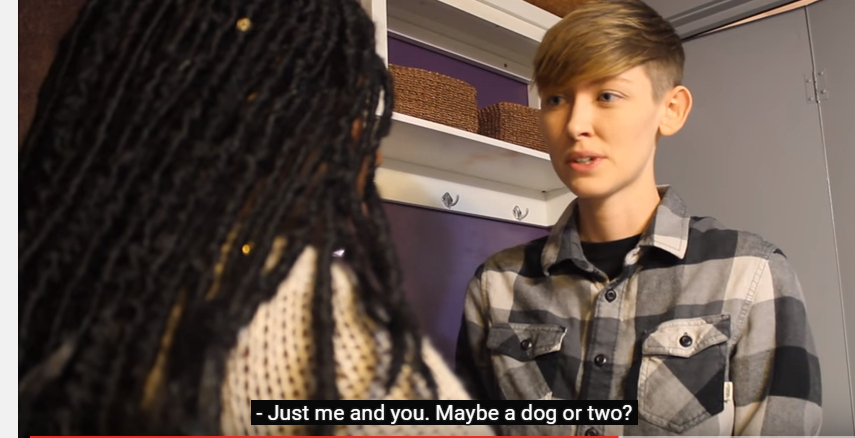 Seriously. This is her pickup line after TWO YEARS of silence. I know a Jo in real life. This is not going to end well. RUN AWAY, ERIKA.

But instead of running away, Erika kisses her and invites her to move in. Absolutely nobody thinks is a good idea, except Lisa, maybe. 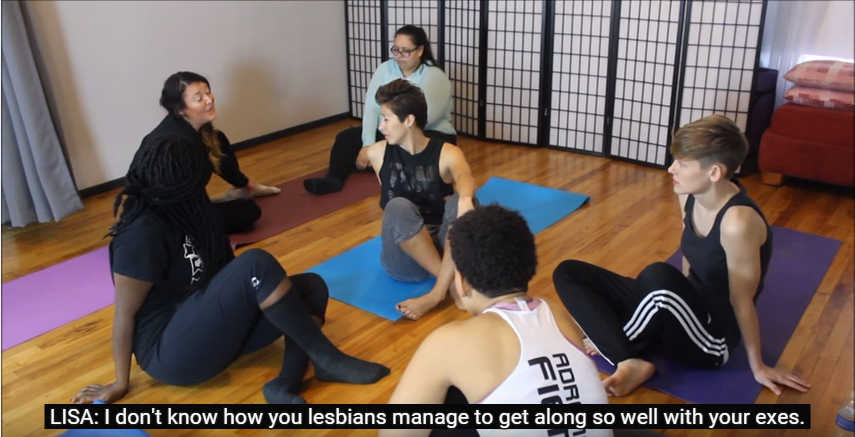 Lisa finds another opportunity to talk about her bf

This surprises me. Erika is usually so practical and mature– how is it that she can see the crux of the issues so clearly when it’s someone else’s issues? Maybe she’s a true romantic at heart. Maybe she has a drinking problem.

Jamie is the cute lesbian from the elevator scene in Season 1, and their relationship causes Rain to struggle with internalized homophobia. Rain says she “just doesn’t like PDA,” but Jamie isn’t buying it, and it starts to cause a rift between them. 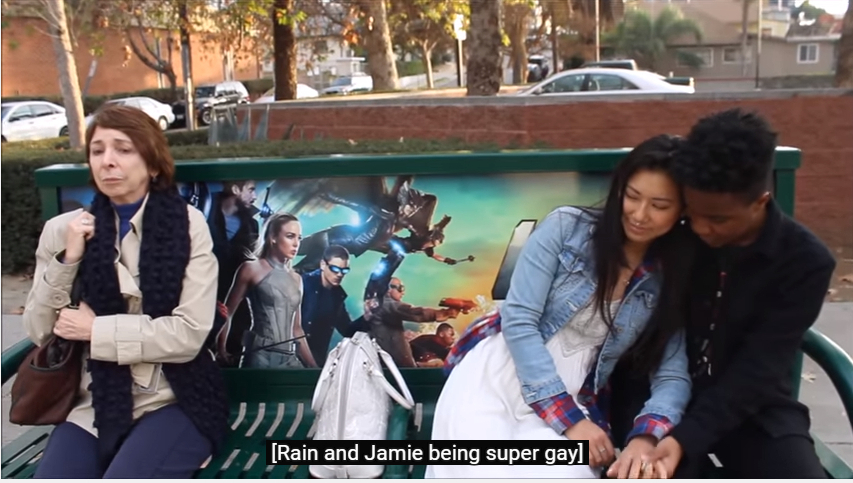 [Rain and Jamie being super gay]

The season ends with Chloe getting fed up with Tumblr, a struggle I really relate to. 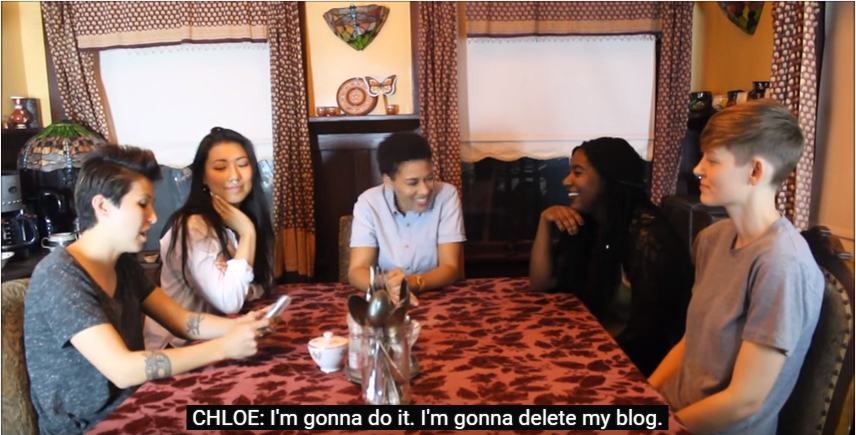 Have I mentioned how much I appreciate Chloe? I’m the opinionated hot-head in my own group of friends, and she makes me feel so much better about that. See? I’m not a dour feminist who can’t see any joy in the world and ruins movies– I’m Chloe! Her friends don’t shy away from her anger, either. That’s refreshing to see.

Chloe decides to quit Tumblr and start her own website just for lesbians.

And this is the premise of the show: if you want your story told right, you have to tell it yourself, in a medium you control. It’s a timely message. Fingers crossed for a third season!