Description: Before Carol was a movie, it was a book called The Price of Salt

The Price of Salt has been on my “to read” list for years, so when I heard about the movie Carol, I thought, “last chance to read the book without spoilers!”  I sat down in the theater less than week after closing the book, and surprisingly, I wasn’t bored. The film adaptation brought the story to life without trying to replicate it page by page.

The movie is beautifully detailed; I had to watch it twice just to take it all in. The plaster has cracks in it. The doors in Therese’s apartment are scuffed. Carol has a pristine 3-piece luggage set with a matching hatbox. The story really takes place in another world, even if you live in New York City where it’s set, and the hardest thing about getting into the book for me was stopping to Google terms like “Independent Subway” and “Catarina dress.” In the film, you’re just there. You can practically smell Therese’s makeup compact as she packs it away in her suitcase.

And the casting is great. Can you believe Therese was The Girl With the Dragon Tattoo?

But Carol was a polarizing movie for many of my lesbian friends, and that surprised me. I loved it, as an adaptation of the book and as a stand-alone movie. I loved that the sex scene didn’t look like pornography, I loved that the two women ended up together, I loved that nobody got raped, and I loved that the director showed so much respect for the source material. That alone is more than we usually get from lesbian movies, particularly ones with male directors (I still refuse to see Blue is the Warmest Color).

As I began to defend the movie to friends who didn’t like it, I realized I was actually defending the book. With an already hefty two-hour running time, a lot of backstory didn’t make it into the movie, so I’m going to channel your 10th-grade English teacher for a moment and say, the film is not the book.

Also, the book is worth reading. 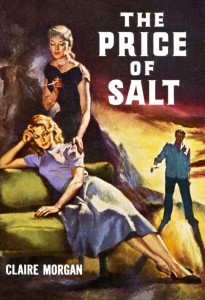 Don’t let the cover fool you; The Price of Salt is literary fiction.  It’s luxurious and tightly written. Little details that seem insignificant at first– a toy train, a torn-up check, a love letter someone forgot to send– become major plot points later. It isn’t so much a coming out novel as it is a coming of age novel.

The visual flourishes were what really made it to the big screen; everything else got cut. If you thought Therese’s fascination with Carol didn’t make a lot of sense, if you were disappointed that the movie ended before we really got to see Therese and Carol acting like a couple together: that stuff was there, it just didn’t make it into the movie.

In the book, we learn that Therese was abandoned by her mother and raised in a Catholic orphanage. This changes everything. You really get why Therese is so entranced by Carol– Carol is her mother and they’re re-enacting her abandonment. Carol is unattainable, distant, and often unkind, and Therese is both desperate for her attention and sure that she can never get it. 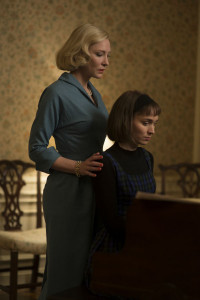 The story is about Therese’s fear of being loved. She likes to create miniature models of what the world should be like, shrink people down to ideal proportions, and manipulate them. She has to learn to relax, let go, and let somebody care for her, and it’s a huge triumph when she finally does.

It’s not exactly a happy ending, though. After you’ve watched Therese struggle with her own abandonment issues, it’s harder to feel good about Carol’s final decision to give up custody of her daughter Rindy. You understand all too well what Rindy is about to go through. Is it worth it to be with someone you love? Fuck. It’s gut-wrenching.

If you were disappointed in the hours and hours of slow-crawling, coded dialogue between the two romantic leads, that was in the source material, and in my edition, it went on for 150 pages. I wish I were exaggerating. But there’s a lot of romantic payoff on the roadtrip, most of which didn’t make it into the movie.

Carol and Therese are sweet together. They stop at cheesy tourist attractions and take pictures. Carol opens up to Therese and becomes warm and vulnerable. Therese tells Carol not to drink when she’s depressed, and Carol laughs it off, but she takes the advice. 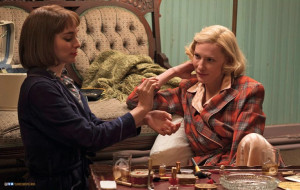 I think that was my biggest gripe about Carol. If it were my movie, I would have cut a lot of the beginning and focused on the romance near the end.

But keeping a crowd of lesbians happy is like herding cats, and in all, I think most of us were happy with Carol. I don’t know any men who enjoyed it; they all complained about the lack of “sexual tension” between the two female leads.

Ironically, The Price of Salt predicted that reaction. Men are used to watching lesbian relationships through a hole in the bedroom wall, through pornographic scenes that shrink lesbians down into ideal miniatures to be manipulated. But men don’t actually know what lesbian relationships are like, because they’re only seeing what they want to see. Or, as Carol puts it:

“You so prefer things reflected in a glass, don’t you? You have your private conception of everything. Like that windmill. It’s practically as good as being in Holland to you. I wonder if you’ll even like seeing real mountains and real people.”

Carol isn’t real mountains and real people, but it’s the closest thing I’ve ever seen in a theater. If it isn’t playing in your city or the movie left you wanting more, pick up the book.