If you’re looking for stories written about lesbians, by lesbians, you can’t do much better than a good autobiography. I’ve been on a lesbian memoir kick for about a year now, but until last week, I was avoiding Unbearable Lightness because I figured it would just be another eating disorder memoir.

I don’t dislike eating disorder memoirs on principle. I thought Wasted was a good (though very, very depressing) book. But once you’ve read one, you’ve pretty much read them all, and you learn to anticipate the classic meltdown when the protagonist finds out that sugar-free gum has calories in it, as well as your own uncomfortable moment of self-recognition when you think, “Oh, god, I’m way too into how fucked up this is,” or “Oh, god, I’ve DONE that,” depending on whether or not you’ve ever struggled with disordered eating yourself.

Unbearable Lightness is kind of like that, and yet it was a really surprising book in many ways. 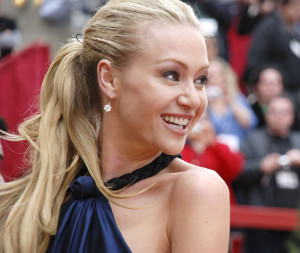 Does this look to you like a woman who worries about looking like a dyke? Before I read this book, if you had asked me, “Portia de Rossi, butch or femme?” I would have said, “femme, obviously.”

In the first few months of my coming out to other lesbians, I realized that I was as much misfit in the gay world as I was in society at large. I was half butch, half femme, neither here nor there.

This fascinates me. I never, ever would have guessed this about her. She is the sort of woman who makes me feel like I am failure at being female. She makes being confident and beautiful look easy.

And yet, she spends the entire book agonizing about her big hands and her closet full of boots and jeans, and during her first red carpet appearance, when a reporter asks her for beauty tips, she freezes up and says, “…lip gloss?”

It just goes to show– you never know what other women might be going through.

I was also surprised to learn that Hollywood is such a misogynistic place. Don’t get me wrong, it’s hard to miss the rampant misogyny in television and movies, and I always assumed that it must go all the way up to the top; what I mean to say is that I was surprised to learn just how bad it really is.

The book begins with de Rossi’s breakout role as Nelle Porter in Ally McBeal, where she was initially brought in to be brilliant and intimidate the show’s female lead. But the head writer and producer David Kelly gets bored with that plot line pretty quickly, de Rossi tells us, so he decides to test out the “new girl” and take Nelle down a peg by writing in a gratuitous sex scene.

“Of course, when shooting a scene like that, some of the feedback is immediate. The energy of the crew changes, and no matter how professional you are, you still feel exposed, cheapened, paid to show your body. Or at least that’s how I felt. And in that scene I was no longer a brilliant attorney who could make the firm more money than it had ever seen. I was stripped of that ability and the respect that comes with it when I stripped down to my heart-covered bra and panties.”

She doesn’t seem to think it’s a secret that the roles she’s playing impart strong messages about “good” women, what they’re like, and how they dress, and she’s keenly aware of how her on-screen wardrobe is coded as she struggles to fit into smaller and smaller sizes.

[M]y wardrobe started out dark and layered, gradually shedding layers of clothes and softening the color palette as I gradually shed my tough exterior and dulled my witty barbs. It was a typical storyline for a “good” female leading lady character: she starts out hard and ends up soft and the metamorphasis from undesirable insect to awe-inspiring butterfly is reflected in the wardrobe.

The message isn’t even subtext, sometimes: in one passage, a representative from L’oreal drinks a beer in front of her at a meeting and then laughs at her because she can’t have any.

That’s what surprises me about the misogyny de Rossi points out in one cringey scene after another– how deliberate, how careful, how planned-out it all is. I guess I figured that the men who produce TV and movies were above it all and cynically giving the people what they want, or, at worst, that they just don’t think too hard about what they’re saying. Maybe I don’t truly believe that, but I want to.

Nope. The truth is brutally simple. Every time you see an actress being humiliated onscreen, it’s because a male writer and a male producer felt that it would be a lot of fun for them to watch.

As her eating disorder gets progressively worse, it’s clear that de Rossi is desperately trying to gain some power in the system. Her “liberation” looks like having a BMI of about 16 and eating canned tuna with chopsticks.

“I started to undress in front of her and stood proudly in a G-string and platform shoes. I felt liberated.”

Yet another thing that surprises me: that the women who play starring roles in shows and films with woman-hating messages actually absorb those messages, to a degree that even the women watching at home may not.

Of course actresses absorb the toxic culture that surrounds them. How could they not? I assumed that actresses see what they do as all business, or that they think of their public selves and private selves as two different people, or that they must experience some kind of immunity since they signed themselves up for it. As it turns out– not really.

And as any woman whose meltdown has been featured in a tabloid story can tell you, the media is happy to find entertainment value in it when they finally break you too.

This glimpse into what it’s like to be a woman in the public eye is what really makes Unbearable Lightness worth your time. I finally get why it’s such a huge deal when women get to write and direct movies with female leads. It’s not about the principle of “inclusion” or “equality;” it’s bigger than that– women can’t escape the male gaze as long as we are acting out stories written and envisioned by men who enjoy humiliating us for entertainment.

Being sick allows you to check out of life. Getting well again means you have to check back in.

Unlike some of the women who have famously broken down in front of the press, Portia de Rossi gets a happy ending. After she collapses on a movie set, she seeks treatment. She takes up horseback riding, becomes a fan of intuitive eating, and meets Ellen DeGeneres. Ellen had always been her “worst-case scenario” since dating her would have to mean being out.

“I highly recommend inviting your worst-case scenario into your life,” she says.