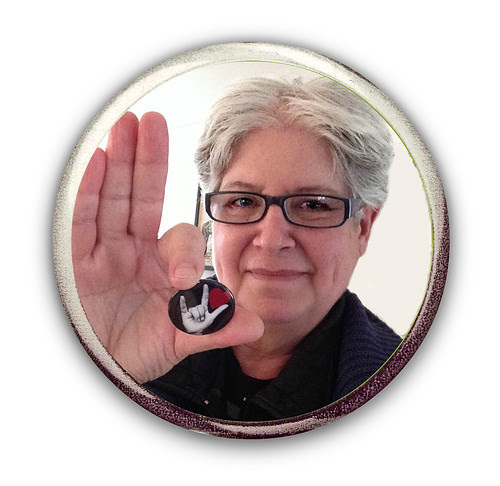 Lesbian icon Liza Cowan is an activist, artist, and writer. She’s been envisioning a female future since the 70’s, when she famously photographed then-girlfriend Alix Dobkin wearing a t-shirt with the slogan “The Future Is Female”, and co-founded and co-edited DYKE, A Quarterly, one of the first lesbian feminist magazines. We caught up with her to talk about art, the future of feminism, and joggers.

Q: You have been working as an artist and designer for years, and you’ve been active in feminism for just as long. What is the relationship between your feminism and your art?

A: I’ve been making art for almost as long as I’ve been a feminist. I was 20 when I first heard Robin Morgan on the radio in New York City, talking about Women’s Liberation.  I was so excited and inspired that I never turned back. I’m 66 now, so that’s a long time. I did go to art school, and before that I spent my most productive time in High School in the art classroom.

Art has always been, for me, a way of trying to make the things I want to see. Sometimes that’s about color and form. Sometimes it’s subject matter. Like many Lesbians, I’m excited and energized by the idea of Amazons. My Amazons Allons-Y collage series, which I did mostly in 2012, sends a troupe of Amazons around the world on a mission of protection and spell casting. Amazons and Witches are very powerful women, and are often willing to be sent on missions. Not that the viewer need know this.

My Amazons, Allons-Y and my Maybe series are both digital collage works, and both have groups of women as their subject matter. They both also invoke time travel. I got the name Amazons, Allons-Y! from Doctor Who.  If you are a Whovian, you will recall that The Doctor is a Time Lord, and that the 10th Doctor often cried out, “Allons-Y” as they were about to start of on an adventure. It means, roughly,  “Let’s go!”

Penny House and I were both the editors and the art directors of the 1970’s Lesbian magazine, DYKE. A Quarterly. I often drew illustrations, and made all of our ads and fliers. Remember, if you can, this was back in the days before computers. We did everything by hand. And the work we outsourced, like typesetting and printing, was also done by Lesbians. Except for the paper and the ink, DYKE, A Quarterly was a totally Lesbian made object. At the same time as we were publishing DYKE, I was also creating and publishing a series of Lesbian buttons for my small company, White Mare, Inc. More art, more Lesbians.

For my photography and painting, I’m not sure how much a part feminism plays. The most important thing, as above, is color, line, form. Subject matter has to be pleasing to me, so that’s often women, for my painting. But plants, old rusty machinery, toys, mannequins, and landscape are my main subjects. I’m not sure there’s anything feminist about what I do. Maybe I just can’t see it. 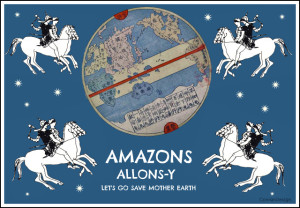 Q: In “What The Well-Dressed Dyke Will Wear”, you described working with a lesbian fashion designer to make “pants that were cut like sweat pants, drawstring waist and elasticized cuffs” as part of an Amazonian suit. Fast forward to 2016, when we now have fashionable sweatpants, known as joggers, just as you described (albeit more mainstream). Do you happen to wear joggers, and do you think we’ve developed a dyke fashion sensibility?

A: I had to look up what Joggers are. Ha ha. No, I don’t wear them, but I’m a huge believer in comfort in clothing. I hate wearing anything that binds, and I do love simple stretch fabrics, knits and jerseys. I’m a fabric nut! I love patterned fabric. But I use it for my home, not my clothing.  The only patterns I wear are stripes, plaid,  and polka dots. Mostly stripes. I keep my clothing very simple. I fit everything I own into one small closet and one small chest of drawers. I wear something until it wears out.

I do not think that we have developed a Dyke fashion sensibility. We have women dressing in what they sometimes call “masculine of center” fashions, but I think this is more a Queer aesthetic than a Dyke one, even though Lesbians have been wearing men’s clothing for a long time.

A: Separatism is an analytical tool, as you said. As such, it’s still viable. It is still a way of asking, “what about women?” I think every woman can benefit from spending a year reading only books by women, or I suppose watching films by women, for instance. And everyone can benefit by not letting in too much information from male dominated sources. These days, that’s almost impossible, since women-only networks don’t really exist. We used to have our own world, a kind of alternative world, in some ways. We had our periodicals, our music, our businesses, our conferences, our festivals, our spiritual networks, our households, collectives, coffeehouses, printing presses, news media, credit unions. schools, camps. These weren’t everywhere, of course. Not by a long shot. But they existed in way more places than the contemporary young woman can imagine. What we have today is a fragile echo of those times. This makes me sad.

Q: Forty years ago, you said that the future would be female. Would you tell us a little bit about the generation of that phrase and what it meant to you at the time?

A: I did not make it up, although I’ve been given credit for it. The Future Is Female was the slogan of Labyris books, the first women’s bookstore in New York City, in the early 1970’s. They made the t-shirt. I made the button with the slogan as a fundraiser for them. And I took the picture of Alix Dobkin wearing the shirt. I don’t remember what it meant to me at the time. As I said in a recent interview:

“The beauty of the phrase is that there is no precise meaning. We are asked to absorb two powerful archetypes, and to imagine them in relationship to each other. It is a dynamic phrase, a lively phrase. In order to make sense of it, we have to engage with the words. The archetype of ‘the future’ asks questions about the nature of time: When does the future begin? Where is the future? How does it happen? As an archetype, ‘female’ covers broad territories. Flora or fauna. Virgin Mary or Kali. Medusa or Quan Yin. Astarte or Parvati. Bringer of peace, or destroyer of illusion. Nurturer or avenger. Mother, sister, daughter, aunt, grandmother. Nymph, maiden, crone.

‘The Future is Female’ reminds me that all life formed in a matrix. Matrix means womb, matrice, mother. Life springs from the female. Whether the future starts right this second, or in a million years, it emerges from the female body; not just the body of women, but of all female sentient beings, including the body of our home, Gaia.

I have also said that the slogan is a call to arms. While I think this is true, it is also true that it is an invocation. If we are to have a future, it must be female, because the rule of men — patriarchy — has just about devastated life on this beautiful little planet. The essence and the spirit of the future must be female. So the phrase becomes not just a slogan, but a spell. For the good of all.”

Q: Are we living in that future yet? How much further do you think we have to go?

A: I think we are always living in the future. And always the past. I love this question.

Q: Where do you feel young lesbian feminists should focus our energy, and how do you think we can best carry the flame in years to come?

Learn the history of feminism, and history in general. Form consciousness-raising groups. Make your neighborhood worth living in. Plant seeds. Don’t be fooled by media bamboozle. Eat well. Always ask questions. Don’t be distracted by gossip. Make friends with some older women. 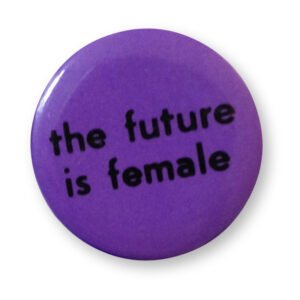 Liza Cowan’s art can be viewed at lizacowan.com, her online store is smallequals.com, and her personal blog is seesaw.typepad.com. We highly recommend that you peruse dykeaquarterly.com for not only the excellent archives of DYKE, A Quarterly but also for the invaluable contemporary annotations.

liza cowan, the future is female