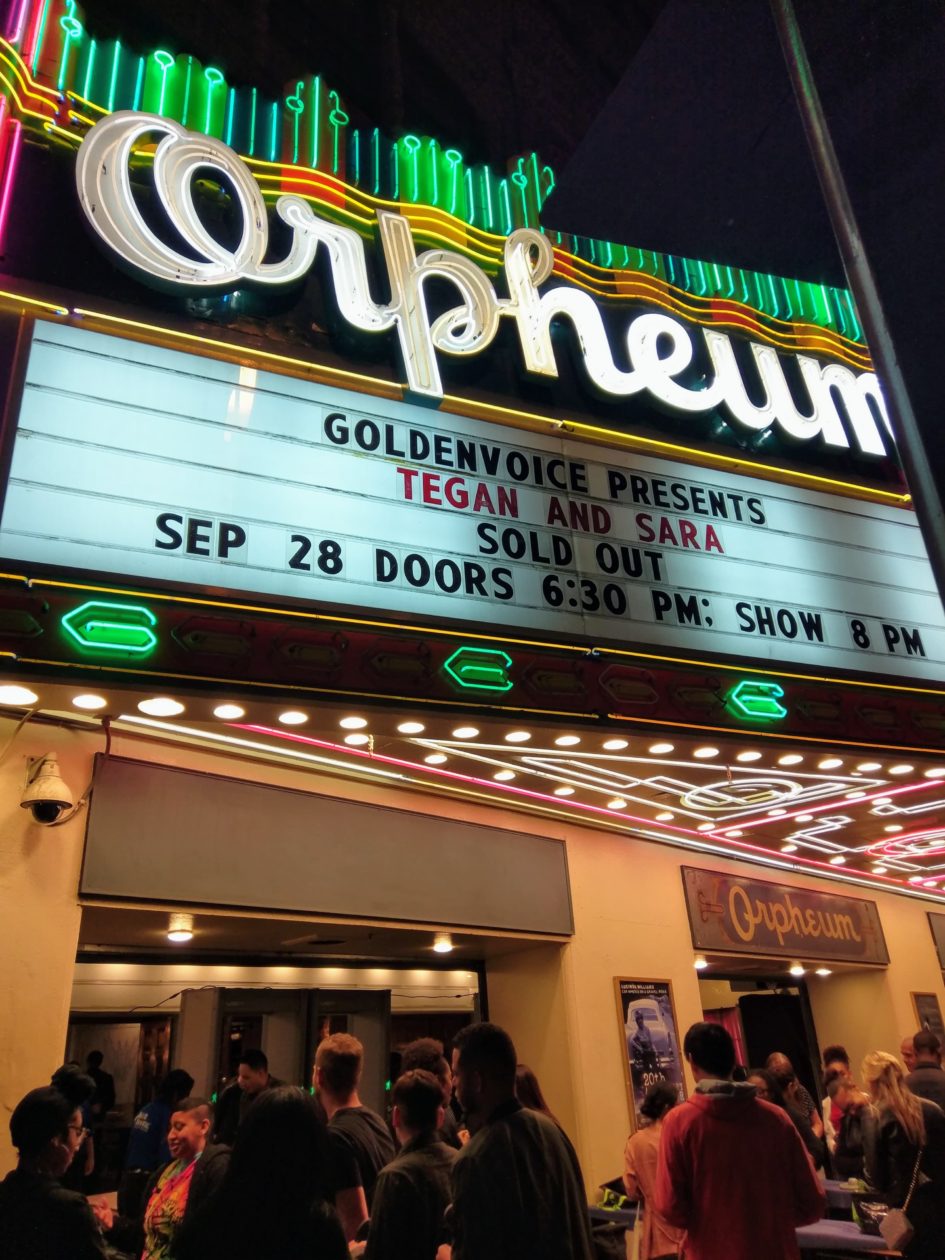 This photo of the marquee (above) is the only photo that I have from last night’s Tegan and Sara show in Los Angeles, and there’s a good reason for that.

While making their ninth studio album, Hey I’m Just Like You, Tegan and Sara reworked songs that they had originally written and recorded as teenagers back in the 90s. Their new album was released just days after their memoir, High School, came out.

The album and the memoir are very heavily inspired by their teenage years, and so Tegan and Sara curated a tour that would take us back in time, to the 90s… where most people didn’t have cell phones.

Upon arrival at the venue, we were given pouches to put our phones in. These pouches couldn’t be unlocked by hand, and as a result, no one was able to record any part of the show– a new experience for me.

In a way, not having access to my phone freed me from the self-imposed burden of having to document the event on social media in real-time. All I had to do was sit back and enjoy the show.

There was no opening act. The show began with Tegan reading an excerpt from their memoir before diving into a song that, at its core, had the same meaning as what she had just read to us. Then Sara did the same.

After Sara shared a story about a girl who had slept with her, and then called things off because “she was only into boys”, she played a slowed-down version of Boyfriend on the piano, and I heard the song in a way that I had never heard it before. Even though it came out on their 2016 record, Love You to Death, I could see an 18 year old Sara writing these words after getting her heart broken.

In addition to the readings and the music, we got to see home videos of Tegan and Sara as teenagers, and they were as funny as they were adorable. First they had long hair that went all the way down their backs, then they shaved their heads and got piercings. We got to see them grow up, find their own style and sound, and become comfortable in their skin.

At the end of the night, we gave Tegan and Sara a standing ovation. The show was truly spectacular, and unlike anything we had ever experienced before.

The good news is, Los Angeles was only the second stop on the Hey I’m Just Like You Tour. You can probably still catch them as they make their way across the US, Canada, and The UK this fall. Here’s a list of all their upcoming shows. Now, what are you waiting for?