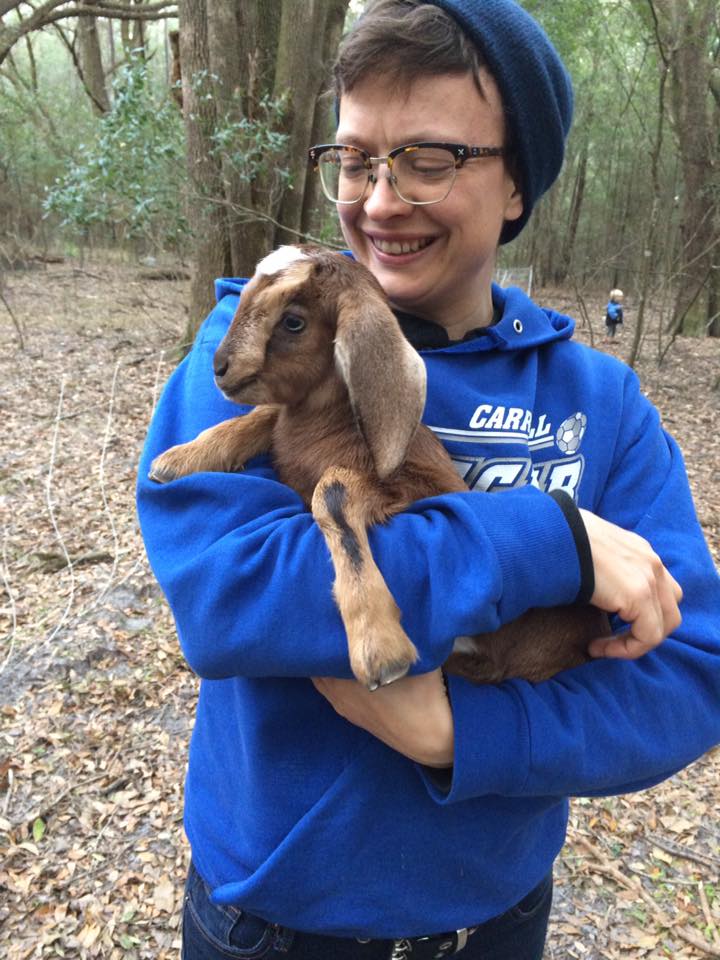 Tanis Clark is the artist behind, Feudal Nerds, an original comic series that we publish biweekly here on Lesbians Over Everything. She and her fiancee Jaime are also the reason why I still believe that true love exists.

ASHLEY: Tell us about Feudal Nerds and why it’s important to you.

TANIS: Feudal Nerds is my autobiographical comic. It started with Hourly Comics Day, which is a day once a year where artists make a comic showing what they’re doing, every hour on the hour, for the duration of the day. During my first one, I had a lot of fun telling the story of my everyday life. I thought it would be fun to make a regular journal comic. I love reading other people’s journal comics, especially lesbians.

I think it’s important to tell our own stories, because there isn’t a lot of media portraying authentic lesbian life. When lesbians show up in mainstream media, it’s to further a straight character’s development, or to make a bullshit point about the supposed tragedy of being gay. In reality, we’re the heroines of our own stories, and most of us don’t have a lot of drama or tragedy going on. We’re just going about our days. There’s a particular dearth of happy lesbian love stories, despite the fact that there are tons of lesbians just quietly living happily ever after. I feel like it’s valuable to show what that can look like. By sharing my life, I’m telling the kind of stories I love to read and want to see more of.

Also, I just wanted to tell Jaime, my fiancee, about how much I love her and how amazing she is. To me, Feudal Nerds is a love letter to her, with illustrations to show her incredible cuteness.

ASHLEY: I originally wanted to call the comic “The Adventures of Jam Jam and Tan Tan” (my nicknames for the couple). Why did you insist on calling it Feudal Nerds instead?

TANIS: I considered several names, and although I appreciated the suggestion, I was never going to call it anything that sounded like it was about a pair of pandas (although it’s true that Jaime and I are swole, fuzzy, peaceful herbivores.)

As soon as I thought of Feudal Nerds, I knew it was perfect. It’s short but distinctive, and it’s an in-joke that made Jaime laugh when she heard it. It stems from an obscure meme about lesbians being either feudal lords or handmaidens. We used to joke that we were a feudal lord-feudal lord couple, minus the hierarchy, so Feudal Nerds is a play on that.

ASHLEY: As an artist, what piece of work are you most proud of?

TANIS: Probably Feudal Nerds! Before this, I’d never worked on an ongoing project for more than a few months. I started out with the intention to keep FN going for at least a year, and I passed that milestone a few months ago. I’ve learned a lot about the way that I work, time management, and discipline during the past year, and I’m really proud of myself for overcoming my perfectionist tendency to jump ship on a project before it’s done. I have fun working on it every week, and I think my skills as an artist and storyteller have improved noticeably.

My background is in zines, and I only started making comics regularly a few years ago. Before that, I mostly wrote poetry with abstract illustrations or collage. I’m planning on printing a Feudal Nerds collection soon, and I’m excited to have a zine that’s more linear and narrative than anything I’ve made before. I have a hunch it’s going to feel really satisfying. 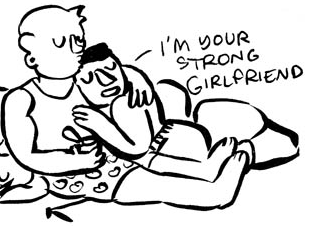 A Drawing From Feudal Nerds

ASHLEY: You just moved from Florida to Wisconsin. What has that change been like for you?

TANIS: It’s freezing! It took me a year to acclimate to Floridian weather, so I figure it’ll take a year for me to get used to the Midwestern chill again. It hasn’t kicked in yet–we’ve only been here a week.

Honestly, so far so good. We moved back here to be closer to family and to take advantage of career opportunities. Jaime is loving her new job while I’m about to start in a position which will actually utilize the degree I got almost ten years ago. So I’m really excited! Plus, she just turned 30, and we moved to Florida a few days before I turned 30, so there’s a little bit of that feeling of things coming full circle. I definitely miss Florida, but Wisconsin is beautiful, and I’m really happy to be here.

Now we just need to find an apartment, because staying in a hotel with two dogs and two cats is already old.

ASHLEY: You and Jaime just got engaged! Who proposed to who and how did they ask?

TANIS: Jaime proposed to me! We’d already discussed wanting to get married, so that part wasn’t a surprise, but the when and where of it was. It was in the woods, it was perfect, we both cried. I love her so much and I never would’ve imagined that a relationship could be so good. I feel very lucky. I can’t wait.

The downer part is, I never realized how much planning weddings take. Before I started researching it, I figured we could just have a chill potluck in my sister’s backyard, but it turns out that won’t be possible. We need rain contingency plans and and a flat place to put tables and actual coordination for the food and so on and so forth. It’s so much work. We’re going to have a lot of friends and family coming from out of town, and I want to make sure everyone has a good time. We also have a strict budget. I envy people who can afford wedding planners. 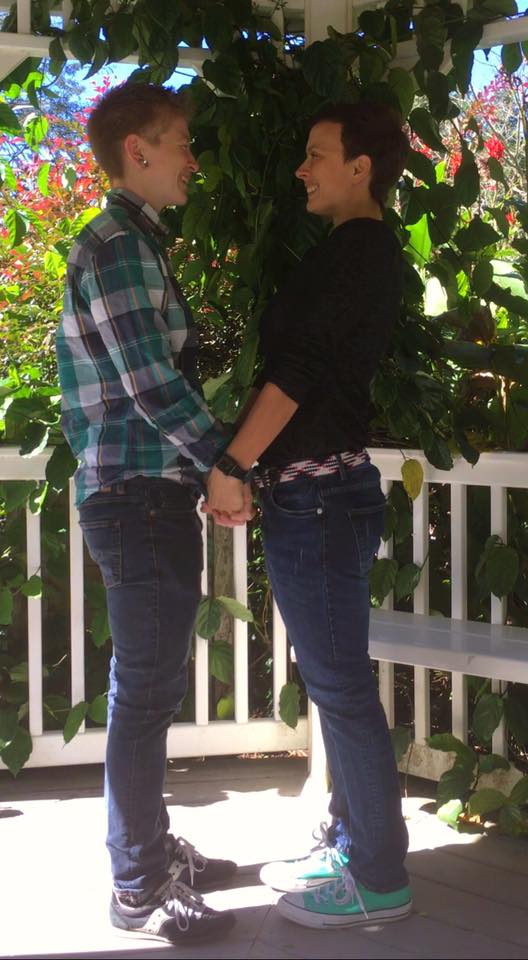 Jaime and Tanis in real life

ASHLEY: Can you offer any advice to those of us who are single and looking for love?

TANIS: I know it’s a cliche, but my best advice is to work on yourself first. The more comfortable you are with yourself, the healthier your relationships with others will be. All of your relationships–not just the romantic ones. Focus on building healthy friendships, having good boundaries, and taking good care of yourself. I’ve been terrible at all of these things in the past, so I’m talking about what I would do differently if I could.

Think about what kind of person you would want to date. For me, that would be someone who has a life of her own, who is hopeful about the future rather than defeatist, and who is honest with herself. So I strive to be those things. Emotional maturity takes work and reflection, and it’s ongoing, regardless of whether you’re single or seeing someone. I didn’t stop working on myself because I started dating Jaime; I actually hold myself to a higher standard now, because she works very hard on herself and she inspires me to be the best possible person I can be.

TANIS:  I’ve always got a few goals that I’m working towards. For 2017, I really prioritized my health. I don’t believe in mental/physical duality and my experience is that my mental/emotional/spiritual health flourishes when I am focusing on physical fitness and living an active lifestyle. I was born with musculoskeletal issues that have been holding me back my whole life, but within the past year, I’ve completely turned my life around through strength training. It’s amazing to be able to do what I want, when I want, and I’m looking forward to seeing how much further I can go.

Physical goals that I achieved last year included competing in a powerlifting meet; deadlifting 200 pounds; getting my first pull-up; squatting my own weight; and completing Couch to 5k (a beginner’s running program.) I also wanted to get a handstand and to bench 120 pounds. I’ve benched 115 and I’m still aiming to get 120 by the end of the year, but I’m probably not going to get a handstand before then. Which is fine, I’ll just aim for it next year! Next year I also want to deadlift 300 pounds, squat 200 pounds (my current max is 135 pounds), and bench 150 pounds. Jaime’s my coach, and I haven’t talked to her about those goals yet, so we’ll see what she says about all that. I also want to run an official 5k with a number and everything. Maybe with Owen (one of our dogs), he loves running. 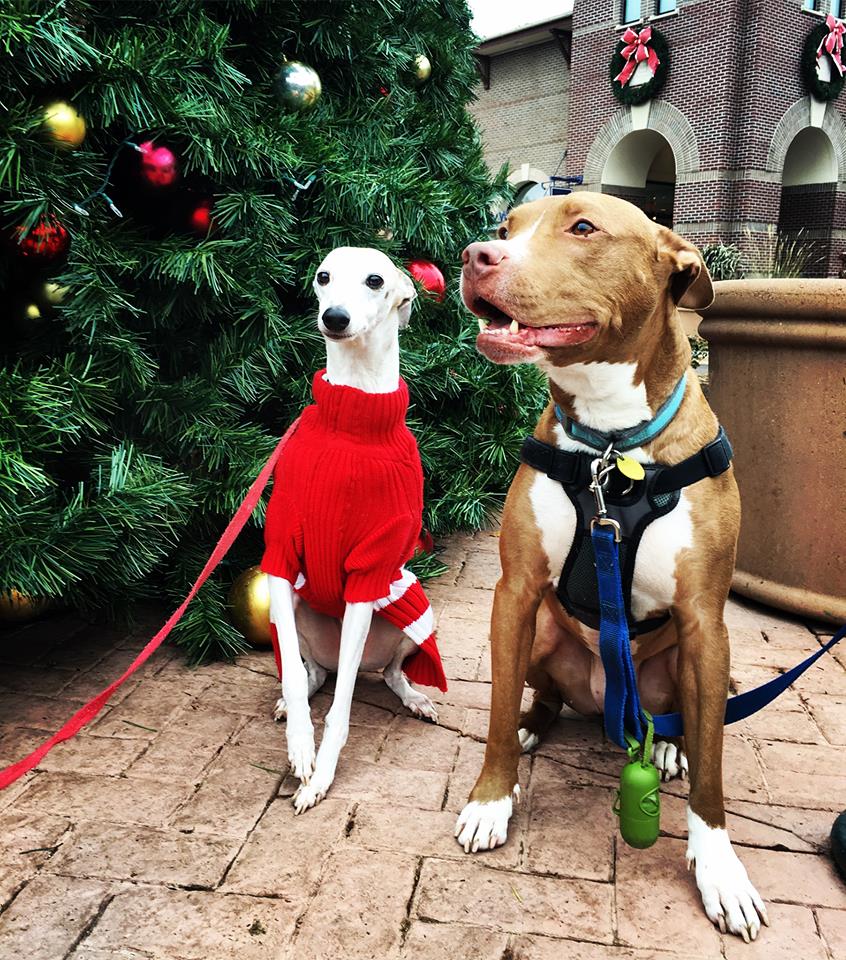 As far as non-physical goals, I already mentioned that I want to publish a Feudal Nerds collection. I want to get married! I’m so excited for that. I never gave much thought to it before, and it’s surprising how much I care about it now that I’m engaged. I can’t wait to stand up with Jaime and be all mushy at each other. I’m excited for cake and dancing and holding her hand.

I want to start at my new job and be part of a community again. I want to find an apartment and make our home together; I care deeply about keeping a beautiful, functional home. I’m really looking forward to having a kitchen again and chopping garlic. I went to the co-op yesterday and they had local garlic that I was just drooling over, but I can’t really cook properly in the hotel. Cooking is a big part of my life and I seriously miss it right now.

Not all of those are big goals. I don’t believe in putting dreams out into the world before they’re ready. I’ll make comics about them when it’s time.