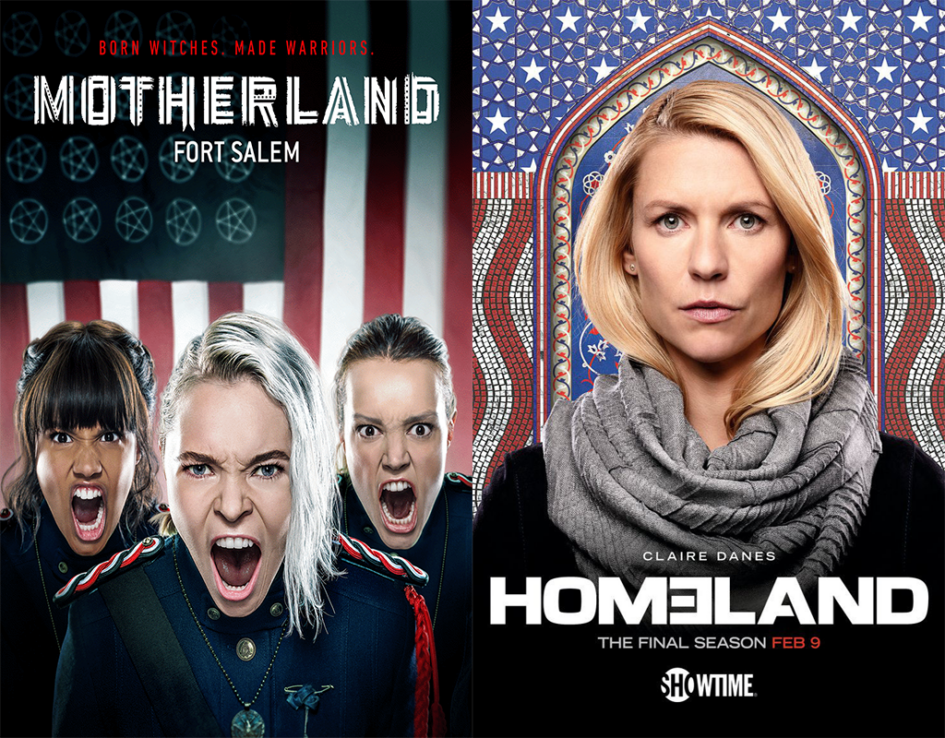 Can you blame me for the confusion?

The establishing shot confirms that we are indeed in the US of A, on account of all the red, white, and blue, America the Beautiful being played in the background, and a barrage of death in a public setting. We’re starting with a promise of shock and awe that ends up under-delivering, although in the very next shot, the spokeswoman of the Bad Guys –I have to assume, as her only line was “We are the (Bad Guys)”– applies her car’s cigarette lighter directly to the forehead.

The bad guys on this show operate under the name ‘The Spree’. The Spree are “a radical group of terrorist witches who say they want to dismantle the global industrial military complex and liberate the witches around the world who fight in their countries’ militaries.” Which, to me, sounds more like the GOOD side here, except that they make people in shopping malls commit mass suicide. Looks like The Spree and the United States Military have more in common than the writers of this show would like us to believe.

We begin on Conscription Day, the day that witches are drafted into the armed forces. I think it’s notable that all of them seem at the very least willing, if not eager, to go. Tally Craven (Jessica Sutton), the girl raised on a female commune, is berated and begged by her mother not to conscript but seems determined to do so for reasons unknown. In the next scene, she’s thanked at the airport, gazed at with awe and appreciation, given a seat on the next flight out. It’s whispered that she won’t need a return flight, she rolls her eyes, exasperated, at the other departing witch. Are these girls really so eager to die? Sutton’s acting, like many things on this show, is just a bit too…obvious.

Abigail Bellweather (Ashley Nicole Williams) is introduced on a tangerine bathed rooftop, necking with some guy we never see again (whoever does the color grading for this show LOVES the color orange). She exercises her considerable power over him with words, essentially brainwashing him into living a good life without her. Her mother is an established, high ranking officer of the Armed forces. Her lineage has all served, all the way back to her great great great grandmother, who did so under the duress of slavery. Her mother tells her to make that ancestor in particular proud, right before she binds herself to service in stride.

We can’t forget, of course, the very reason we’re watching this show in the first place: Raelle Collar (Taylor Hickson). Raelle is a lesbian from the beginning. There’s no backstory or inner torment or discovery through male inflicted trauma. She’s a gay witch with an undercut and that’s that. I appreciate the fact that she didn’t need a Very Special Coming Out Episode in order to be gay. It’s just a part of who she is. She’s also the most skeptical of conscription in the trio, but still goes into it without a fight or real argument against it, despite being almost certain that it will lead to an early grave.

Their induction into the Magic Armed Forces starts off with a speech by General Sarah Alder, played by the very handsome Lyn Renee:

“It is a solemn day, much like the day some 327 years ago when I made a deal with the Massachusetts Bay Militia. My terms were simple: Honor me, make a place for me and my kind, and we will win your wars. That was before we were even America.”

Now, call me a conscientious objector, but 327 years of mandatory service in unending war seems like kind of a shitty deal. Wouldn’t a better deal be something like “Stop burning my sisters at the stake, and we will strive for peace between all people. Or else…” Instead, Alder says “a witch’s place is in the army.” I have to disagree.

Now, getting into this show I was expecting Gay Sabrina Goes to Bootcamp, and so far I am pleasantly surprised on the homosexual front, and overwhelmed on the painfully obvious pro-war propaganda front. What Motherland and Homeland do have in common, other than confusingly similar names and title cards, is that they are both aggressively American and aggressively pro-military, even when occasionally addressing the personal cost of service. From the never ending seas of Red White and Blue and the handwringing over the necessity of enlistment to the background noise of terrorism on every TV screen, the pro-military message rings loud and clear. The difference in these two shows stems from their target audience: Homeland is made for middle aged white America, whereas Motherland is targeted towards gay Millenials and Gen Z’s.

The Trio’s first meeting is rocky. There’s tension between the straight-laced and prideful Abigail, and rebellious, resentful Raelle, with the naive and sweet Tally playing mediator. This dynamic continues for a majority of the episode. They have a weird discussion about virginity and their witchy Cutie Marks, seemingly out of nowhere. Did you know your magic tramp stamp gets glittery after you have sex for the first time? Tally sure didn’t!

The next day, we finally get into the big magic with a cool water ceremony. I do love the mechanics of magic in this show. Magic in this universe is utilized through sound. It’s a fresh take on magic, and the auditory effects play well into the tone of the show. Motherland’s magical component is the voice of the women utilizing it. This symphonic, harmonic ability is mysterious and powerful, with different specializations and class features. It can be as thunderous as the storm it summons, or whispered below the octave of human perception. The vocalizations establish a more palpable mood than the sometimes overwhelming color grading, with haunting intonations and tri-octave harmonies that intensify with the power and bond of those that sing them. The swelling orchestral soundtrack–punctuated with modern synth and pop–fortifies this, along with some fairly well handled CGI magic effects.

Raelle slips out before we can really get into it, though, and meets a similarly truant cutie named Scylla on her walk. They get caught and berated by some higher ranking dykes before heading back. The next time they see each other they’re sharing a clandestine drug-enabled flight sesh.They haven’t even known each other a day and they’ve already shared two whole demerits! Skip the U-Haul, I think I hear wedding bells. In the next scene they share, they’re going at it L Word style, hands in pants, no foreplay but all foreshadowing. I’ll put $20 on it–Raelle’s hastily acquired girlfriend works with Spree. She’s going to play on her doubts, ask all the right questions, and the big reveal will come with a big decision–convert for her love or break up for the bond she’ll inevitably build with her team and oh just kidding I didn’t even have to wait another episode because the first one ends with that reveal. Hot new girlfriend is the intro sequence bad guy. Will she choose lady love or her dedication to the cause? Which “she” am I talking about? Will this relationship last a whole season? Find out next time on Homeland for Lesbians!

Overall, this isn’t a bad show. In fact, I ended up binge-watching most of the season. It’s just…so obvious that it’s almost insulting. I am no more immune to propaganda than the next dyke, I unironically enjoy Brooklyn Nine-Nine, but at least that show gives you a chance to stop thinking and just enjoy.

Motherland is just so jam packed with military themes in a way that I find plainly unnecessary. The show loses next to nothing by removing the overarching military theme. After all…why would witches join the army or participate in war in the first place? Witches are the antithesis of patriarchy: notoriously counter-cultural, historically persecuted, nothing says anti-establishment like women and witchcraft. These witches could still fight the bad guys and have an organization loaded with dykes in uniform. Hell, they could even rub shoulders and bump heads with the actual military, but for them to be IN it, to have a whole branch? It just doesn’t make sense. The only reason that Motherland is a military show is because this is a(n admittedly good) propaganda campaign aimed at Generation Z, the gayest and most anti-war generation yet. These days, military recruitment efforts have to be gayer, more youthful, more diverse, and most importantly, subversive to keep up (well…somewhat subversive. The recruits are all going to War College after this, for Chrissakes).

Now, you may think I am being a bit alarmist or reading into things too much, but consider how much of American culture is built around war. Beyond the Go Army ads and military recruiters tabling at high schools and shopping malls with promises of tuition assistance and a 2012 Dodge Charger, there are video games, movies, children’s toys, and… Freeform TV shows. For a bit of perspective, in 2017, the Department of Defense requested almost $575 million for its advertising programs alone.

Recruitment is necessary to keep the machine of the military industrial complex functioning. Young bodies are needed to keep boots on foreign soil, and youngsters these days just aren’t as eager to join the cause anymore. Are we too jaded? Too gay? Do we know too much about the sordid history of the US Military? Or is representation on a TV show the key to our coveted conscription?