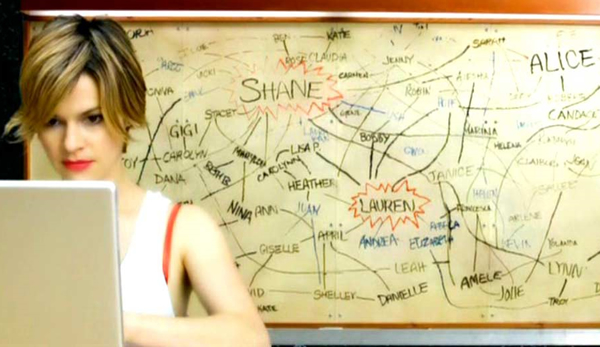 It happened late last night, in the corner of a crowded bar. Kelsie and Amanda inched closer and closer together until their lips met– a seemingly harmless interaction.

What you don’t know is that up until that point, they were the only two people in their friend group of five who hadn’t hooked up with each other. To an unknowing bystander, their kiss and what followed after, seemed a slobbery but ultimately irrelevant encounter, but to the rest of their friend group, the effects of Kelsie and Amanda’s hookup were catastrophic.

We reached out to Stephanie, one of the members of the group, asking her to tell us exactly what kind of damage had been done. She started off by giving us the details about who had hooked up with who and in what capacity. Here’s the breakdown:

Stephanie met Kelsie at a bar in West Hollywood back in 2015. In Stephanie’s words, the two of them “did that weird thing where they weren’t dating, but were spending lots of time together and making out occasionally.” Kelsie wasn’t ready to be in a relationship at the time. That changed when she met Lou-Ann, a country girl who had just moved to Los Angeles from Kansas to become a playwright.

It was during intermission at Lou-Ann’s stage production of What the Girls do in the Barn, that Stephanie met Jessica and Amanda— best friends who had been dating on and off again since college. Jessica and Amanda were on one of their “breaks” at the time, but they had already bought tickets to the play when things were good between them a week and a half ago. Jessica flirted with Stephanie to piss Amanda off. Never one to be outdone, Amanda kissed Stephanie. They ended up having a threesome in the backseat of Stephanie’s truck. Completely oblivious to the complexity of the situation, Stephanie wondered if the new perfume she was trying out was what had made her so irresistible that night. She wasn’t sure, but she ordered six more bottles just in case.

A year later, during Jessica’s birthday party, a drunken Amanda suggested that they all play spin the bottle. 45 minutes later, the game ended when Amanda kissed Lou-Ann a few seconds too long. Everyone else had laughed and kissed briefly when it was their turn, but Amanda had kissed Lou-Ann a little too intensely, and Kelsie was pissed that Lou-Ann didn’t try to stop it.

Kelsie broke up with Lou-Ann one month later, citing the fact that Lou-Ann still hadn’t told her parents the truth about their relationship–in their minds, Kelsie and Lou-Anne were just roommates who spent a lot of time together–but everyone wondered if Lou-Ann’s kiss with Amanda had served as a catalyst.

That brings us to where we are right now. Everything changed last night when Kelsie and Amanda– the only two members of the group who had never so much as kissed– hooked up at a bar three months after the “spin the bottle incident”. As a direct result of this encounter, the fate of the entire group hangs in the balance now more than ever.

Will Lou-Ann and Kelsie ever get back together? Everyone previously assumed that they would, but will Kelsie’s fling with Amanda destroy any hope of that ever happening? Worse yet, now that everyone in this lesbian friend group has hooked up in one way or another, will they have to go out and make new friends? The thought of that sends shivers down their respective spines. The world as they know it has changed forever.

This has been a fake news story.