We made a survey asking lesbians questions about their online dating habits, and we posted said survey on our social media pages. One hundred people responded, and the results are in. We hope that this information comes in handy as you navigate the murky waters of online dating.

When asked the question “what is your type?”, 40% of respondents said that they didn’t have a type, 26% chose butch, 18% chose gender non-conforming, and 16% chose femme. 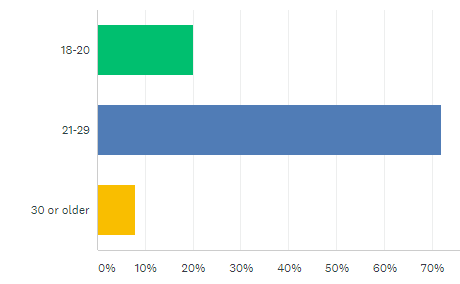 The most frequently used dating site among the lesbians who responded to this survey was OK Cupid (38%). The Her App came in second with 31% of the votes, and Tinder came in third with 26% of the votes. Three respondents out of one hundred chose “Plenty of Fish”, and two respondents wrote in their own answers.

When asked if they want to meet up with people from apps in real life, 58% said “possibly. It depends on the person”, 40% said “absolutely”, and 2% of respondents said no.

When asked what they hope to gain from using dating apps, 69% of them chose “a girlfriend”, 20% chose “friends”, 8% chose “casual sex”, and 3% chose “someone to message with when I’m bored.”

The final question on the survey was: “overall, how successful have you been at online dating?” The options were:

(B) Somewhat – I’ve gone on one or more promising dates

In summary, when it comes to lesbian online dating, most of the women involved are between the ages of 21 and 29, most of them are femmes, and most of them “don’t have a type”. The most frequently used site is OK Cupid, most people only send the first message every now and then, people mostly ignore messages because they aren’t interested in whoever sent them, and people are most likely to respond to messages that come in the form of a question.

Most lesbians who use dating apps are looking for girlfriends as opposed to casual sex, most of them are interested in meeting up with people from dating apps in real life, and most importantly, only 14% of survey respondents describe themselves as “very successful in online dating”, so you’re far from alone if online dating hasn’t quite worked out for you.

My take on all of this is that more lesbians need to be willing to send the first message. What’s yours?