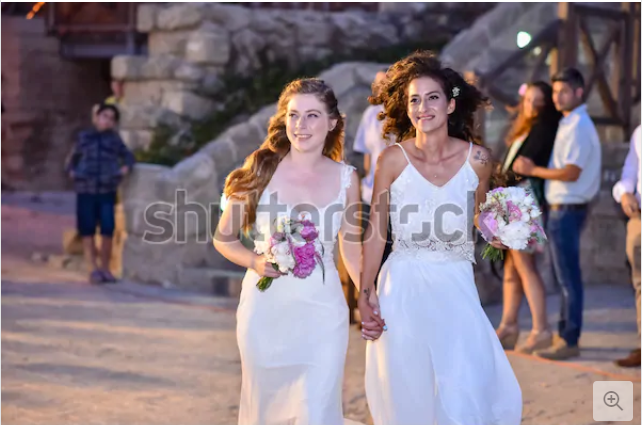 Last week, a video of a man yelling “that’s so hot” at a lesbian wedding as the brides kissed went viral. It was shared widely on social media and received mostly positive comments.

One Facebook user wrote “aww, how cute.” Another said “that guy’s my hero!” A third said “we’ve come such a long way since Stonewall. The world needs more allies like him.”

While most of the comments were positive, some of them were really salty–for lack of a better word. One gay man wrote “If it were two guys kissing, everyone would be disgusted. It’s really funny how lesbians are more accepted than gay guys.”

A queer individual who asked not to be referred to using any pronouns wrote “Ugh. Of course lesbians would buy into the cissexist heteropatriarchal façade that is marriage. What a bunch of conformists… On the other hand, the guy who said ‘that’s so hot’ during the ceremony, was queering expectations by yelling something out at a time where guests are usually meant to be quiet. That is truly radical.”

With so many opinions floating around about their wedding, we decided to reach out to the newlyweds directly to see how they know the guy in the video, and how they’re feeling about all the public attention.

“Yeah, I think that guy was my coworker’s Tinder date. I’d never met him before” said Yvette, one of the newlyweds. “We eventually had to kick him out because he kept following us around and saying ‘let’s make a baby’. I think he’s probably seen too many episodes of The L Word.”

Yvette’s wife, Sandra added “As for the public attention, it’s so weird that a video of a stranger interrupting our wedding is being shared around the internet positively, but we know better than to read the comments. We’re just ignoring all of that, and living our best lives.”

This has been a fake news story, however it was inspired by an article on NBC called Lesbians More Accepted than Gay Men Around the World Study Finds