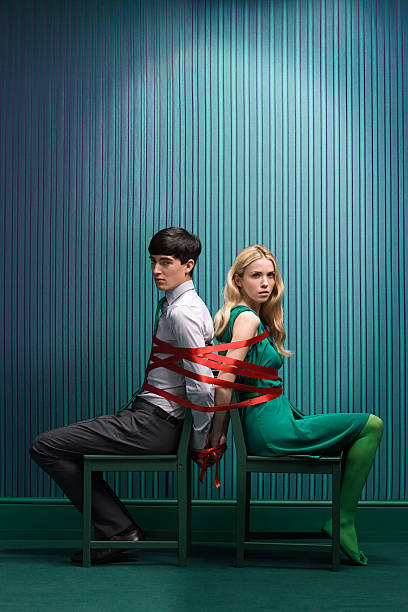 Chase wiggles in anticipation against the ropes that bind him to his sole remaining earthly possession.

For weeks, the couple browsed all the typical dating apps, in search of a “unicorn” for the three-way that would save their marriage. They tried Tinder, Plenty of Fish, and OkCupid, but were put off by the number of single men that swiped right on their profile, which almost exclusively features pictures of Jessica.

To be fair, their joint profile does mention in the very last line that they are indeed a couple seeking an open-minded woman to “have some fun with.”

Tired of seeing a bunch of men on their radar, the couple finally found a dating app that seemed like it would be loaded with single women: HER!

“It was our hallelujah moment.” Jessica reports.

Three days ago, they matched with Amanda Nolastnamesplease, the woman who is currently robbing them. We caught up with Amanda in the driveway to get her side of the story.

“Yeah, HER notifies you when you get a like. So at first, when I saw that Chase and Jessica liked me, I was just going to report them. Then I was like, nah. I can do better than this. I’m gonna rob them.”

And rob them she will! The entire Mansfield estate is being loaded onto a U-Haul as we speak.

Back in the living room, Chase reports that he was excited when he matched with Amanda because he has “always wanted to get with a lesbian.” He thrusts his hips into the air as he says this, seemingly unaware that he is also being thrust into the reality of owning literally nothing but a dining room chair.

When asked how they feel about currently being robbed, the couple seems perplexed.

When asked how she feels about robbing a couple for the simple act of trolling a lesbian dating app for threesomes, Amanda seems unmoved.

Amanda shrugs as she lifts a flat-screen TV onto the bed of the U-Haul with practiced lesbian ease.

“I deserve this stuff. You wouldn’t believe the kind of filth they’ve been texting me this entire time.”

As if on cue, her phone chirps as the couple sends her the third text in a row of Unicorn Emoji, Eggplant Emoji, Three Water Droplets Emoji, and Devil Face Emoji.

Gesticulating with her phone that continues to buzz with activity, Amanda sounds truly exasperated.

“I mean, for goddess’ sakes, they’re not even using the damn phone to call the police!”

The phone chirps again. It’s a dick pick from Chase.